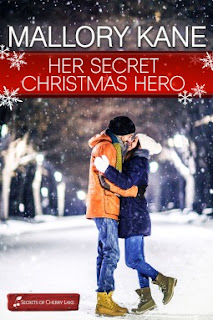 The last thing Allie McHale expected to do on Christmas Eve was to rescue a man in handcuffs after he survives a horrific car crash in Montana. His explanation of why he was handcuffed gives Allie pause and she quickly realizes that there's more to Jacob Reeves than meet the eye. Overnight, they learn more about one another and share very different tales about their families. They start to trust each other and pretty soon, something more meaningful blossoms between them. When Christmas morning finally dawns on them, so does the reality that Jake still has an obligation to fulfill, one that'll lead him away from Allie.

Her Secret Christmas Hero by Mallory Kane is the sixth book in the multi-authored Secrets of Cherry Lake series. This was a book I wasn't expecting because I thought the series had already ended, but it appears that Christmas has come to the small town of Cherry Lake and since I quite enjoyed the first five books, I'm more than happy to see this series continue. Allie McHale and Jake Reeves are two new characters and while one may wish that they had met under more pleasant circumstances, their love story proves miracles do happen and those that occur over the Christmas season tend to be most memorable.

The dilemma that Jake faces--whether or not to become state's witness against his father and brother--was such an original aspect in this story. You can't help but ask yourself what you would do in his shoes. After all, family is still family, even if they happen to be involved in criminal activities. Meeting Allie becomes a turning point for him, but I liked that he didn't make any rash decisions concerning a future together. She inspires him, but he's also very realistic about his situation with the authorities, so when it comes to believing that the normal life he's dreamed of is a possibility is difficult for him to grab with both hands.

Allie was such a great heroine, facing challenges in her life with her father having recently passed, yet remaining steadfast and hopeful. Her genuine affection for her mare CeCe made her an even more lovable lead character. She's wary of Jake when she initially discovers he's a criminal, and she continues to be careful of him in the beginning, but I loved that she wasn't narrow-minded and saw that there was more to him. Her Secret Christmas Hero was a wonderful addition to the series and I'm hoping it'll be the beginning of a Cherry Lake Christmas spin-off series, though it can be read as a standalone too. Five stars! ♥