Review: Before the Storm by Leslie Tentler (Rarity Cove #1) 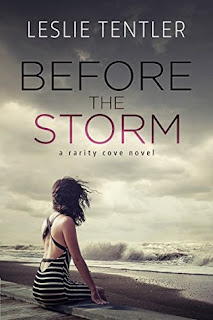 Note: This ARC was provided by Barclay Publicity in exchange for an honest review.

It's been six years since Trina Grissom ceased to exist. Now, Samantha Marsh is putting her culinary education to good use, opening an artisan café in Rarity Cove, South Carolina and making a name for herself in the small but exclusive community. When she meets a little girl named Emily, her heart melts, but it's when she locks eyes with Emily's father, Mark St. Clair, that she begins to feel an attraction she knows she cannot afford to have. But there's something about the widowed hotelier that calls to her and try as she might, keeping her feelings locked away becomes impossible. When someone from her past threatens to bring Trina Grissom out of hiding, Samantha and Mark will have to choose whether what they love they have is worth fighting for or if it will be easier and safer for one or both of them to walk away.

Before the Storm is a romantic suspense novel from author Leslie Tentler and is set in the fictional coastal town of Rarity Cove in South Carolina. Trina Grissom is a woman who thinks she has escaped her tortuous past by creating a totally new identity for herself. As Samantha Marsh, she's living the kind of life that she's dreamed of for years. Falling in love with the single father Mark St. Clair isn't part of her plan, but there's a connection between that refuses to be severed and she's made an equally strong connection with Mark's daughter Emily, who has been mute for the past two years due to witnessing the accidental death of her mother, Mark's late wife. The love story between Samantha and Mark is one that marks a turning point for them since they've never been open to the possibility of being with someone else for some time.

While the romance aspect of the book had my attention, it is the mystery and suspense that proves to be captivating. Samantha has worked hard to bury any and all connection to Trina, but it takes one tenacious individual to wreak havoc on everything she's created. There are a couple of twists in the story and they certainly kept things quite interesting. When combined with the love story, you can't help but empathize with Samantha because she deserves to find love and happiness with Mark but then keeping the kind of secrets that she's got would weigh heavily on any potential relationship. The conflict is resolved in a way I wasn't expecting but appreciated for its originality. I'm hoping that Mark's siblings, Carter and Mercer, will also get their stories told and that Before the Storm is just the beginning for Rarity Cove. 4.5 stars. ♥

Purchase Before the Storm on Amazon | B&N | Kobo.