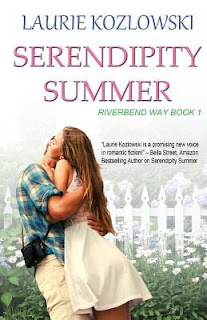 
Five years ago, he was her boss and she was working for him over the summer, and while together, there's an undercurrent of attraction between them, one that neither of them pursues...until circumstances have Anna and Jake crossing paths in Riverbend, Tennessee five years later. With an inn that she's inherited and needing to be refurbished, plus a twelve-year-old daughter who's being used by her ex to further his political campaign, Anna has a lot on her plate. Jake is proving to be a distraction she didn't expect and one that's sowing confusion within her heart. Will they be able to have a future together beyond the summer?

Serendipity Summer is the first book in the Riverbend Way series from Laurie Kozlowski and is a contemporary romance set in a small town called Riverbend. Anna and Jake shared in a flirtation of sorts while they were working five years prior to their unexpected reunion. I don't know if I would really classify this as a second chance romance because they never really did anything about their attraction before. The premise sounded promising, and I'm usually a fan of small-town romances especially when they involve characters in their thirties or forties; unfortunately, I just didn't connect with the story or the characters.

I had difficulty connecting with any of the characters and because this is a series starter, I wanted my curiosity to be stirred by the supporting characters so that I can keep my eye out for the rest of the books in the series. I'm not saying that the characters were terrible. I simply didn't feel anything for them and there just wasn't any chemistry between Anna and Jake, as far as I was concerned. Then there was the storytelling which felt choppy because of transitions that were abrupt. The basic idea behind the story was interesting and I wasn't bored. It just lacked in certain areas. I'm giving Serendipity Summer three stars. ♥