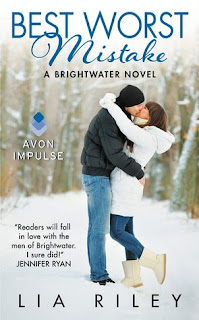 Wilder Kane had his reasons for leaving behind his hometown of Brightwater, California over a decade ago. He's tried to atone for his sins by doing the best job possible as a smoke jumper in the state of Montana. When a terrible accident leaves him with an amputated limb, thereby ending his career, he returns with his brothers to Brightwater but insists on being left alone in the cabin he owns. He's isolated himself, never venturing into town, relying on whatever groceries and supplies his brothers bring him, and even ordering books from the local bookstore to be delivered to him. The sudden appearance of Quinn Higsby in his cabin is like the breath of fresh air he's always needed but claimed to have never wanted. She makes him want to take a chance on living his life again but will she still want him when she learns his past?

Third time's a charm with Lia Riley's third addition to her Brightwater series, Best Worst Mistake! I liked the first two novels, Last First Kiss (which was about the middle brother, Sawyer Kane, and his first love Annie Carson) and Right Wrong Guy (which was about the youngest brother, Archer Kane, and heiress Eden Bankcroft-Kew/Edie Banks), but this one struck that perfect balance of lighthearted humor and heartwarming drama with just a hint of suspense and mystery, making it my favorite. Fans of the series finally get to know oldest brother Wilder Kane, which is something I've been anticipating since there isn't all that much that's mentioned about him other than he's a smoke jumper working in Montana and rarely returns to Brightwater. Once you learn Wilder's story, you'll agree that he deserved his own happy ending.

There's a great deal of emotion weighing upon Wilder and it isn't simply because of what happened when his parents were killed in a fire. He was the eldest among the three brothers so he carries memories of how his parents were and the great life they all had prior to the fire. Your heart breaks for him when you learn about the heavy burden of responsibility that he's been carrying since he was six. The accident that cost him his lower left leg and a job he was proud of has him floundering, but it's that one interaction with Quinn Higsby that doesn't knock his world of its axis but actually rights it so that it can begin turning once again. Not only is his relationship with Quinn at the heart of this story but also how all of his relationships with his remaining family--his grandmother and his two brothers--are not just mended but strengthened.

I adored Quinn! She always had this sunny disposition and tried to never let anything get her down. Even when she was awaiting the results of a medical test, she refused to let it determine how she would live the rest of her life. She inspired Wilder to begin living his life again and live it with purpose. The fact that these two were book lovers made me love them even more. Add to that their genuine love for family and the community and they encompassed what this series has always been about. Speaking of family, with the three Kane brothers now with the women they'll be spending the rest of their lives with, I'm going to keep my fingers crossed that the series isn't over yet because I've been curious about their cousin, Kit Kane, and Marigold Flint since the second book. One more for the road, Lia Riley? Five stars for Best Worst Mistake. ♥