Review: No Better Man by Sara Richardson (Heart of the Rockies #1) 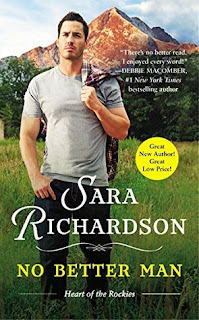 After turning down a very public marriage proposal, Avery King need to focus on work--something she's always been good at--and finds herself in Aspen, Colorado. All she has to do is convince the owner of Walker Mountain Ranch to sell their property to Avery's father in order for them, in turn, to build a five-star resort. But recovering alcoholic and widower Bryce Walker has no intention of taking offer that Avery or her father can come up with. He wants to bring the ranch back to the way it was during its glory days. Unfortunately, with mounting bills and debts, Bryce knows it'll be an uphill battle to not only keep his family's land and ranch, but to breathe new life into it. However, being around Avery is making Bryce feel as if he's ready to live his life again, but will he be able to do that with her without doubting her motives?

No Better Man is the first novel in the Heart of the Rockies contemporary romance series from author Sara Richardson and it's such a great series starter in that it gives readers a beautiful love story about second chances, in both life and love. Avery King and Bryce Walker are adversaries but that's because Avery wants something Bryce has and he refuses to give it to her--Walker Mountain Ranch. Even with her business savvy, Avery isn't a shark and isn't the type to do anything underhanded in order to get Bryce to take her offer. She understands what ties Bryce to the ranch and why he doesn't want to sell it. In the process, she falls for him and the ranch as well as the people closest to him. Avery is a softie but she's also a practical realist and in the financial state that the ranch is in, she knows that Bryce is facing a tough fight.

My heart couldn't help but break for Bryce. The man has been through a lot in a short span of time, and the weight of responsibility upon his shoulders is a very heavy burden. He's a good man--he was a loving husband to his wife and he's a caring son and a loyal friend. Yes, he tends to be stubborn and it takes a good long while for him to trust, especially someone like Avery who one can't help but think has ulterior motives for sticking around for as long as she did. He hasn't been able to move forward since his wife's accidental death, and being with Avery makes him want to finally do so, but he's also afraid to take that step. Bryce's struggle to let go of his past in order for him to have any sort of future with Avery was heartrending but it also felt real, so I absolutely appreciate that the author didn't attempt to downplay it.

Of course, this isn't solely Bryce's story to tell because Avery also has her own issues when it comes to her father. The fact that he isn't some sort of ogre or unfeeling man makes her situation even more difficult. She draws parallels between Bryce and her father and she's fearful that what happened to her father after the death of her mother is exactly what Bryce is going through and he'll end up just like Avery's father. Avery and Bryce's love story proves that some people are brought together for a reason and they work best with one another. Avery came along at the right time in Bryce's life, and while there was no minimizing just how much Bryce loved his wife, the love he and Avery shared is what brought him back to live. No Better Man was definitely one of my favorite reads this week and I'm giving it five out of five stars. ♥