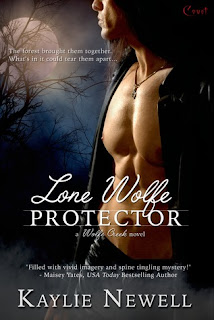 It's been a year since Maggie Sullivan's best friend disappeared without a trace. Now, Maggie's returned to Wolfe Creek and is determined to see progress made in the case. Unfortunately, she's up against a town that either refuses to share what they know or prefer to hide behind tales of superstition and lore. One of those who would prefer she leave is Deputy Koda Wolfe, but once he recognizes her determination to stick around, he begins to offer his assistance and soon, his protection. The more they search for answers, the more difficult it is for them to avoid falling for each other. But deep within the dark forests of Wolfe Creek is a mystery that could raise more questions. Something--or someone--is watching both Maggie and Koda.

Lone Wolfe Protector is the first book in the paranormal romance Wolfe Creek series from author Kaylie Newell. The series itself is centered on the disappearance of Aimee Styles and after a year of being on various forms of media begging for help, Maggie Sullivan, Aimee's best friend and the person she was with on the day she went missing, is back in Wolfe Creek to see how far the case has progressed. She initially meets resistance from sheriff's deputy Koda Wolfe, an ancestor of the founder of the town, but then he finds himself unable to resist the lure of spending time with Maggie. They develop feelings of love and trust over the next few weeks they're together but they also have disagreements when it comes to the case.

This is the kind of series starter that lays the groundwork for future installments as well as introduces readers to the recurring cast of characters. However, there are unresolved story lines that the reader is left with at the end, and you do end up with more questions than you started with. You become curious about what Wolfe Creek and its secrets, as well as what's going on with Koda's younger brother Zane and if he and Candi Brooks will ever find happiness together. Then there's the whole Aimee Styles situation, wherein we do learn what happened to her but we also want to know how she's going to deal with her current state. Lone Wolfe Protector was intriguing and well-written and I'm giving it four out of five stars. ♥