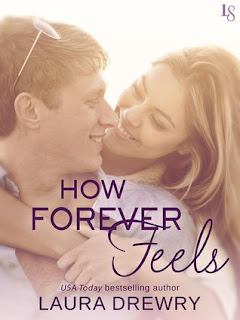 Maya McKay and Jack Rhodes have been friends for four years, even though two of those were spent without much communication after Maya decided to leave her cheating husband who just happened to be Jack's best friend and someone he considered a brother. Jack regrets his missed chances with Maya but now has an opportunity to spend time with the girl who's had his heart from the beginning. When it becomes clear that Maya's interested in being more than friends, Jack is hesitant because of his relationship with his best friend and his family, who took him in when he needed help the most. Jack is torn between his loyalty to the family that's treated him like he belonged and his feelings for the only woman he's ever loved. When push comes to shove, will Jack choose Maya and their chance at forever?

How Forever Feels is the fourth and latest addition to the Friends First series from bestselling author Laura Drewry. I'm assuming this is also the final book in the series since involves the last remaining still single friend among the cast of recurring characters. Just like with the first book in the series, Plain Jayne, the lead characters here have been friends for a period of time, though Maya McKay and Jack Rhodes's friendship is much shorter compared to Nick Scott and Jayne Morgan's. As much as I liked Jack and thought he was a really great guy who deserved to be happy with the girl he's always loved--Maya--I admit to being frustrated with him at times because it felt as if Maya was the one he never chose. I get family loyalty and the loyalty he felt toward his best friend, but it was high time the guy chose his own happiness.

I've liked Maya since the first book in the series and seeing her growth throughout all the four books shows how far she's come from being an unhappy wife with a cheater of a husband to a woman who wanted to find love and happiness. She had a business of her own and was surrounded by strong women who were her friends and soul sisters and also had the support of the men in their lives. Her story was an inspiring one because it was about choosing herself first. If this is really the end of the series, I'm glad that I came across this book and was inspired to read the first three in the series before tackling this one. This had a great cast of characters that made me laugh and smile and all those quotes from movies brought back memories. Friends First proves love from friendship is the best. How Forever Feels gets 4.5 stars. ♥