Review: You for Christmas by Madeline Ash 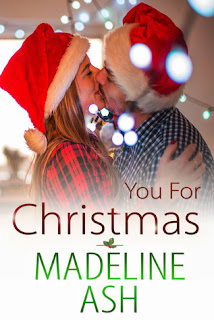 She stole twenty thousand dollars and gave half to her older sister's best friend with the one request that he take her sister Stevie with him when he leaves home. Eight years later, Regan Case is at Felix Nickson's front door and asks him for a place to stay for a couple of days. Felix is hesitant because Regan doesn't want Stevie to know she's back in Melbourne, but he relents, knowing this is the least he can do for her after she helped him when they were just teenagers. In the short span of time they live together, Regan and Felix become comfortable with one another and their feelings quickly escalate into much more. But she had her reasons for leaving Melbourne eight years ago, and once Felix and her sister Stevie learn what exactly prompted her to do everything she did back then, they may wish Regan had never come back at all.

Ah, these Christmas stories from Tule Publishing are tugging at my heartstrings with each new one I finish reading. Each of the three I've read so far--Her Secret Christmas Hero by Mallory Kane, Three Nights Before Christmas by Kat Latham, and this latest one by Madeline Ash--can be read as standalones but you can also go ahead and read the other inter-connected stories that Kat Latham and Madeline Ash have written previously or the rest of the multi-authored Secrets of Cherry Lake series that the first book I mentioned belongs to. With Madeline Ash's Christmas offering, You for Christmas, I have yet to be disappointed by the holiday fare, and she definitely took this story to a place that had my heart squeezing in empathy for Regan Case and everything she went through and wanting to give Felix Nickson a long hug.

I had an idea why Regan decided to leave her foster home when she was sixteen and why she asked Felix to take Stevie, who were both eighteen, on the day he would run away from home. This was an emotional story because of what she's had to live with for years, but it's also a hopeful one and leaves you believing in the power of love--not just romantic love, but the love we have for those who mean the most to us, whether they be a family member or a lover or even a friend. Things between Regan and Felix do evolve quickly, but there's nothing frivolous about what they feel for each other, and you become just as invested in both of them as they are in one another. I'm hoping that Stevie Case gets her own happily-ever-after in the future, I'm adding The Playboy to my long to-be-read list, and I'm giving You for Christmas five stars. ♥

Purchase You for Christmas on Amazon | Kobo.