Review: More Than Everything by Cardeno C. (Family #3) 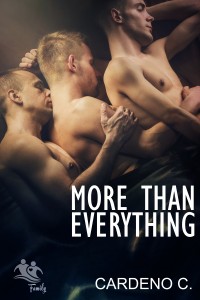 Charlie Rhodes has loved and lost twice, once to his first love and best friend, Scott Boone, and then years later to Adan Navarro. Both times, he was left behind, but now Charlie doesn't have the time or inclination to do anything about the fact that he's gotten his heart broken two times before he was thirty. He's got his young niece and nephew to take care of. But then fate steps in and brings back Scott and Adan into his life. The two men he loved are now a couple who have been together for years. The realization brings all of the hurt back to the surface yet again for Charlie, but both Scott and Adan tell him that they want him to become part of their relationship. Now, it's up to Charlie to decide if it's his turn to walk away or if being with Scott and Adan is something that he is ready to risk getting into, even if there are no guarantees at all.

More Than Everything is the third novel in the Family series from author Cardeno C. and is the first in the collection that features a menage relationship. There's just one main character here and that's Charlie "Chase" Rhodes, who we met in book one. He was Charlie when he was younger and in his first relationship with neighbor Scott Boone; he was Chase when he was older and involved with Adan Navarro. Charlie's individual relationships with Scott and Adan were different but still ended in heartbreak. Admittedly, I liked Scott more than I did Adan, and even though Adan is no longer the gay guy in the closet he once was by the time they see each other again, the way he treated Charlie when they were together was terrible. On the other hand, Scott and Charlie were young when they separated and had no other options.

This is my least favorite book in the series, and it has nothing to do with the whole menage relationship. I've read other books featuring menage relationships before and have never had any issues with three people being involved in one committed union. My main reason for not liking this one as much as the other three in the series was because I felt Charlie was more of a convenient addition to Scott and Adan's relationship. He was what they needed so that there was a better balance sexually since Scott and Adan were both tops and Charlie was a bottom. This was more about the domestic and sexual benefits--including two alpha males going off to work while Charlie kept house--than it was about love. Overall, the story was well-written and I really liked Scott and Charlie together. 3.5 stars for More Than Everything. ♥

Purchase More Than Everything on Amazon | B&N | Kobo | Smashwords.