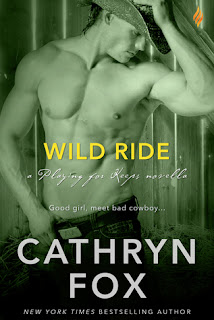 When it came time to choose as the one who got away and would be invited for a week-long stay on the dude ranch he co-owned with his two best friends, marketing tycoon Tyler Mackenzie had only one girl in mind: Jess Gray. That one kiss they shared under the mistletoe was one that he never forgot, nor could he forget that she walked away from him right after. Now, with a whole week together and nowhere for Jess to run should she feel the urge to do so again, Mac hopes to show Jess that they're meant to be. But even though it's easy for Jess to trust Mac, it's far more difficult for her to believe that the man bent on fulfilling her secret fantasies will continue wanting her once he grows bored after their one week together.

Wild Ride is the second novella in bestselling author Cathryn Fox's Playing for Keeps series. Mac and Jess grew up next to each other, but with Mac being the wilder, more extroverted one between the two of them, Jess felt intimidated because she was always shy and quiet. But, there's a saying to warns us to watch out for the quiet ones, and in the case of Jess, her conservative and meek demeanor belie the erotic and kinky fantasies that she's kept secret in her notebook. It seems that she's been writing these fantasies down for a long time because Mac got a peek at something she had written down--a threesome--years before, but it's mentioned in the notebook she has now, so I'm wondering if she's carried the same notebook since then.

While the first book in the series, Slow Ride, had a more romantic feel to it, this second one was really about longtime fantasies coming true, which was all part of Mac's campaign to win Jess over. I wouldn't exactly say that there's more sex here than there was in the previous book; just that the sex here has a kinky side to it, not that I'm complaining. There are hints of sweetness thrown in so that it doesn't come off as if all the main characters are interested in is sex, sex, and more sex. While Jess does worry about Mac's being a workaholic, it doesn't factor in as much as I would have expected, especially since she mentions it more than once. Overall, Wild Ride was a good read and lived up to expectations. Four stars. ♥