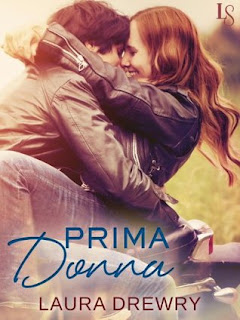 She may have just closed the doors on her salon, but Regan Burke refuses to throw in the towel. She'll re-open her salon at a new location one day, but she's realistic and knows that she needs money to keep coming in if she wants to be approved for a bank loan and continue to pay for her mother's care at a facility. The last thing she needs right now is a distraction, but when it comes in the form of a very hot pediatrician, keeping her distance proves to be more difficult than she anticipated. She may have hooked up with Dr. Carter Scott on New Year's but now that she's accepted the job as receptionist at the practice he's working at, they can't cross that line again. They valiantly try to remain in the friend zone, but as they begin to trust each other and share long-held secrets, commitment is looking like a possibility to shoot for.

Prima Donna is the second novel in the Laura Drewry-penned Friends First series from Loveswept and is about Carter Scott and Regan Burke, cousin to Nick Scott and close friend to Jayne Morgan, respectively, from the first novel, Plain Jayne. This was my favorite book in the series and by the time I write this review, I'll have gone through all four Friends First novels. Carter was such a memorable supporting character in book one, especially when he saw much more than either Nick or Jayne were willing to admit or open their eyes to. Learning his personal history and everything he's gone through puts him in a whole new light and the guy joins the ranks of my favorite book boyfriends for his sheer generosity and kindheartedness. The fact that he's such a caretaker when it comes to those closest to him is a great bonus.

There are deep-rooted reasons why both Carter and Regan are commitment-phobes and while that makes them seem like the perfect twosome for a hook-up in the beginning, it becomes an obstacle as their feelings for each other evolve throughout the story. These two were not necessarily friends to begin with, and they do sleep together even before you can actually consider them friends, but I liked seeing their friendship grow over time and how they're able to grow to trust one another and be there for each other. Your heart breaks when Regan has strained conversations with her ailing mother and it squeezes when Carter interacts with his young patients. This was a book that put a smile on my face more than once and had me cheering these two toward their happily-ever-after. Prima Donna is a favorite and gets five stars. ♥