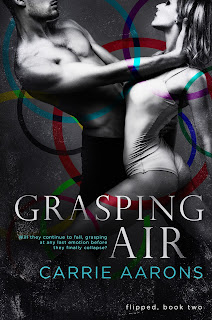 After reading Blind Landing a couple of months ago, my expectations were high for the second novel in the Flipped series, and author Carrie Aarons did not disappoint! The tension that seemed to surround London Olympic medalists Jared Hargrove and Peyton Adams whenever they were in close enough proximity to one another in the series starter finally boils over in the sequel, Grasping Air. Four years ago, Jared and Peyton shared one unforgettable week together, basking in the thrill of winning gold at the Games and at discovering their feelings for one another. But they walked away breaking each other's hearts, and now, they're thrown together when Peyton is brought in to replace of another Olympians. Can they survive three months of touring or could this be their shot to right the wrongs from four years ago?

Jared and Peyton had the kind of tension that I look forward to seeing between two main characters in a romance novel. Theirs really is a love-hate thing, with unresolved issues after the abrupt end of their one-week fling (though calling it a fling makes it sound less than what it actually was--which was one hell of an intense whirlwind love affair) mixed in with those feelings of love and lust. I'm glad that it took a while for them to get their act together because it made for a far more interesting read and allowed me, as a reader, to get to know both Jared and Peyton better as individuals and not immediately as one unit. The other members of the gymnastics team were also still as present as ever, but they weren't overly obtrusive, just enough for me to miss Natalia Grekov and Spencer Russell and to be even more curious about the others.

Admittedly, there were times that I found myself not too happy with the behavior of these two. Jared was purposely hurtful with his words, cutting Peyton down because she had hurt him, while Peyton often acted carelessly, throwing caution to the wind and not always taking into consideration how her actions would be perceived and if they were hurting Jared. But goodness, how I loved these two when they finally got their act together. When they realized that there was no battling how they felt and that it was the real thing and they were in it for the long haul, they stood together and refused to let anything or anyone try to break what they had. Carrie Aarons writing is, once again, on-point, making the reader feel as if they're right there watching the gymnasts perform. Five stars for Grasping Air and looking forward to book three! ♥

Read my reviews for the Flipped series: