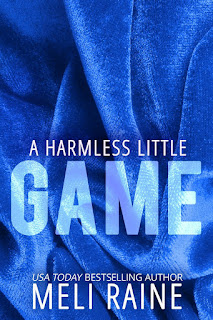 A Harmless Little Game is the first novel in the romantic suspense thriller series Harmless and was penned by bestselling author Meli Raine, one of the pseudonyms used by Julia Kent, bestselling author of the Shopping for a Billionaire series. This was such an intense read, one that had my heart pounding as Lindsay Bosworth was victimized by three men while one looked on. Upon her return from four years of "recovery"--four years in which no one was ever charged for the rape that was immortalized on video, going viral, with everyone claiming Lindsay was drunk and high and consented Lindsay's safety is put in the hands of close-in security, headed by Andrew Foster--her ex-boyfriend and the one who was there the night she was gang raped and stood idly by. Soon, she learns bits and pieces about what happened that night and its aftermath. She may have been a victim of rape but she refuses to remain one. This time, Lindsay's ready to take her destiny into her own hands, and she intends to make those who hurt her pay...

Meli Raine's writing is intoxicatingly good. She hooks you from the get-go and it's just humanly impossible for you to take your eyes away from every single detail in this story. The best thing about this book was the fact that Lindsay refused to stand back and be treated like some simpering female needing to be rescued. She didn't want to play the victim card and you could see her gain more inner confidence as the story went on, knowing what her end game was going to be. Of course, this was a dangerous game she was playing and it wouldn't be much of a suspense novel if she didn't get any push-back for her actions. This ends in a cliffhanger and not everything is fully resolved, so if you're like me--the evil cliffhanger hater--you'll be feeling quite a bit of frustration. The second and third books in the series--A Harmless Little Ruse and A Harmless Little Plan--are slated for release in the November and December, respectively, so it isn't too long a wait. If you love well-written romantic suspense novels, go with A Harmless Little Game. Five stars. ♥