Review: There's Something About Ari by L.B. Gregg (Bluewater Bay #2) 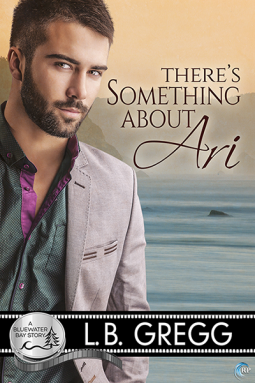 There's Something About Ari by L.B. Gregg is the second book in the multi-authored series entitled Bluewater Bay. As with the first book, this has a friends to lovers theme but that's where the similarity ends since the lead characters here have been best friends since they were children with a five-year separation that occurs. This is a shorter and fairly quick read compared to the other books that are currently available in the series but it's still one that's quite entertaining and worthy of the time put into it.

Buck Ellis and Ari Valentine have been best friends ever since they first met on the school playground in the second grade. They grew up together but while Buck had his future all planned out, Ari was dealing with issues at home and gaining a reputation as a troubled teen. But then Buck's mother suddenly passes away and Ari disappears just when Buck needs him the most. Buck is forced to shelve his plans, becoming a guardian to his younger brother Charlie and trying to maintain a stable home life for him.

When Ari returns to Bluewater Bay five years later, he is no longer the bad buy he once was and shocks the heck out of Buck by buying the house next door and consequently becoming his neighbor. Ari has made a name for himself as an actor and is now working on Wolf's Landing, the television show being shot in Bluewater Bay. Buck is at a loss as how to handle Ari's return but decides to keep his distance and avoids his best friend as much as possible. However, Ari has other plans.

Buck and Ari obviously have issues that they needed to thrash out, especially since the circumstances of Ari's leaving were a mystery to Buck and the timing was less than ideal. Their fortunes turned, with the one expected to not make much of himself now an actor with a thriving career and the one with the bright future now stuck working as a barista in the same coffee shop he's been at since he was a teenager. There are feelings of abandonment and anger but there's also guilt and long-held secrets.

Ah, to have a crush on your best friend as teenagers only to be left behind at the worst possible moment in your life; it's no wonder that Buck felt the way he did when he saw Ari again. But you know what they say about absence and distance...still, I was glad that there wasn't this instant re-kindling of their friendship. The hesitation on Buck's end made it feel more real and you could see that Ari didn't want to give up without a fight. There's Something About Ari was a good follow-up to book one and it gets four stars. ♥

Grab a copy of There's Something About Ari on Amazon | Barnes & Noble | Kobo.