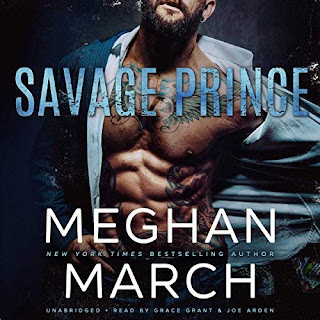 Leave your inhibitions at the door, or in this case, at the start of this audiobook, because Meghan March is back with the first book in her Savage series, which happens to be part of her Anti-Heroes collection. This author makes no apologies for how downright dirty--in an absolutely sexy way--her books are, and if her loyal readers are being honest, that's a huge part of why her books are as popular as they are. But here's the thing: they aren't just about sex. There's a whole lot of story that goes on as well, and just like in the case of her Mount trilogy, the story arc plays throughout the three books set for her trio of Savage books. Things get off--pun unintended but seems quite apt for this first book--to a too-hot-to-be-bothered start with Savage Prince, with Temperance Ransom, who was Keira Mount née Kilgore's assistant in Ruthless King and Defiant Queen but later promoted to COO in Sinful Empire.

My review will be short because I don't want to give away any details that may end up coming off as spoilers. The story, as expected was superb, and yes, it does end in a cliffhanger. The main characters in this series starter have me more than intrigued as to what's going to happen next with them, especially with one particular "complication" that comes to light. Now, as far as the narration goes, neither Grace Grant nor Joe Arden are new to me, so I had expectations and those were nicely met. Grant does a fantastic job giving Temperance a voice, and while Arden only makes his voice heard in the final part of the audiobook, it's enough to whet your appetite for the second one in the series!

Meghan March has, unsurprisingly, given fans and readers several reasons to explore the story of Temperance and the mysterious man who has completely taken over her world. Combined with excellent narration, this first ever March audiobook that I've listened to, was a dream come true. And while Savage Prince is an absolute five-starred standalone, longtime March fans will be happy to know there are cameos from some notable characters in both the Beneath and Mount series. ♥