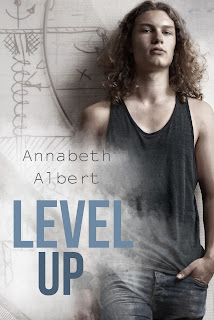 Originally released as part of the multi-authored Exposed anthology which was published a couple of months ago and had stories tied together by photo shoots for a charity calendar with hotties under thirty, Level Up is a novella which is loosely connected to author Annabeth Albert's #Gaymers and Out of Uniform series, though the connection to the latter has more to do with the main characters in the first book than anything else. This book can most certainly be read without having read any of the novels in either of the series that I mentioned.

Landon may be a brilliant physicist but that modeling for a sexy calendar isn't exactly something he thinks he's equipped for. Getting to meet the photographer he's gotten chummy with over email, though, is a definite perk, but when he realizes that the pink-haired pixie he had envisioned as Bailey Morgan turns out to be a lumbersexual hottie, Landon is at a loss. There's no denying his attraction for Bailey, but his panic attacks have Landon pushing the big guy with an even bigger heart away. Landon will have to level up if he hopes for more.

I've always enjoyed Annabeth Albert's writing, and while this novella isn't my favorite among all her books, it was still a good enough read and proved to be entertaining. It did feel like a struggle for the connection between Landon and Bailey to last throughout the entire novella, but Landon's push and pull got tiresome after a bit, and my heart broke for Bailey. I also saw them working out more as friends than lovers, but maybe that's just me. However, the good more than outweighed the not-so-good, so Level Up gets 3.5 stars out of five stars. ♥

Purchase Level Up on Amazon.