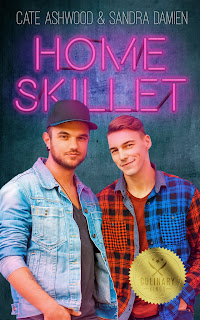 Home Skillet is the first book in the new Culinary Kings series and it's co-written by Cate Ashwood and Sandra Damien. This friends-to-lovers slash second-chance romance series starter is about best friends Benjamin Evans and James Carver. Friends since they were kids, Ben has been in love with Jimmy for years. Their culinary careers may be going in different directions--with Jimmy destined to open his own restaurant and Ben stuck as a line cook in an establishment that will never even be considered for any Michelin stars. But for as long as Ben gets to spend time with Jimmy--especially their occasional hook-ups--he's good. And then Jimmy goes and announces he's getting married to a woman, and while their friendship continues over the next six years, things shift between Ben and Jimmy. When his wife asks Jimmy for a divorce after five years of marriage, it's all the blood, sweat, tears, AND money he's spent on their restaurant, The Carvery, that concerns him most. Left with no one else to turn to, Jimmy goes to Ben, but will he get a sympathetic ear or a chilly reception instead?

This was a good read, one that had a hint of angst to it but still a relatively light enough read. I liked that there was tension between Ben and Jimmy years after Jimmy basically put the brakes on their whole best-friends-with-fun-benefits thing going on. This was a far more believable outcome than had everything been absolutely friendly and Ben had been wholly welcoming to Jimmy. While it's pretty obvious that the story ends happily and with Ben and Jimmy being in love and planning their future together, what happens between the beginning and the ending had a couple of surprises in terms of how certain situations played out. I was also happy to note that there was, indeed, enough of the culinary world here and not just a mere mention of where they worked thrown in here and there. While I'm familiar with Ashwood's writing, Damien is a new-to-me author, and it seems that their writing partnership was one that worked well. I enjoyed reading this series starter, and I'm curious as to where the rest of the Culinary Kings series will lead. I'm giving Home Skillet four out of five stars. ♥