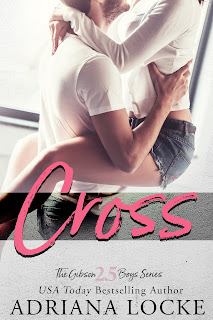 I originally read Cross when it was part of the multi-authored Team Player series that was released in December of last year. Adriana Locke has released the novella, which has been expanded to a degree and now includes Restraint and Crash, two short stories that were each part of two other (free) anthologies--Men in Power and Guilty Pleasures, respectively--that, like Team Player, are no longer available. I've read the short stories as well, but Locke's stories have proven to be the kind that are worthy of re-reading, and that was true with this novella and the short stories. This can be read as a standalone, but I'm going to recommend that you read the Gibson Boys series in order so that you have a far better idea of who the other mentioned characters are in these other stories.

Cross is a second-chance love story about Cross Jacobs, Machlan Gibson's best friend, and Kallie Welch. Their relationship crashed and burned a few years ago, cemented further when Kallie left their hometown of Linton. Now she's back, and she intends to make Linton home once again. Of course, that means that crossing paths with her ex is inevitable, so maybe there isn't any harm in their trying to be friends again--a concept that Cross is not thrilled about, not when he wants to be far more than friends with the woman whose heart he hopes to win back. But can Kallie reconcile the guy who made bad decision after decision when they were still a couple with the one that swears he's a changed man? Can she put it all on the line or risk getting her healed heart broken by him again?

Restraint is about business executive Holton Mason and attorney Blaire Gibson. They literally bump into each other at the airport and while there's a connection between them, they go their separate ways. Lo and behold, they see one another again in the most unexpected of circumstances. But do these two workaholics dare to let loose and explore their attraction even if it's just for a night? On the other hand, Cross is much shorter story and involves Nora, who works at Crave alongside Machlan, and Kip, Linton's very own sheriff. Kip's on the look out for whoever seems to have "borrowed" someone else's tractor. Could Nora offer up information on the guilty party or is she going to be offering up something more, umm, enticing to the sheriff who makes Nora want to do naughty things?

I love how the main novella feels more well-rounded. We get Cross and Kallie's history as a couple, so we have a better idea as to why they reached the point that they did before they broke up and why it's a struggle for Cross to re-gain Kallie's trust. Then there's Holt and Blaire's quickie read, which I'm actually hoping is a prelude to a future spin-off that involves the Gibson that isn't a boy AND the first among the Mason brothers. Paging, Adriana Locke! Now, Kip and Nora's story may be the shortest among the trio, but goodness me, I dare say it was the hottest in the bunch. With the way Locke left this particular story, I'm going to cross (pun not intended!) everything that I can cross and hope we get even more of this hot twosome. So, all three stories considered, I'm giving Cross five stars! ♥