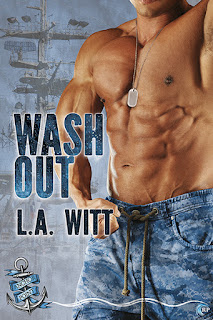 You know how as a reader you become addicted to a series and have loved every single book that's been released so far and then the newest is published and you're all excited and then it doesn't meet your lofty expectations? That's me with Wash Out, the seventh and latest addition to L.A. Witt's Anchor Point series. I went into it expecting to love it as much as I did the six that came before it because hello, how could it not be as good as all those other stories?! But maybe I was asking for too much and maybe assuming that every book in a series is going to be a five-plus-starred read was too lofty a goal. This wasn't a terrible read; it just didn't get to me the way all its predecessors did. Still, I recommend you read this standalone book and judge it for yourself.

If you're familiar with the series, than you may remember former Marine Logan Carter from Afraid to Fly, who was Lieutenant Commander Clint Fraser's ex-boyfriend with a drinking problem. He's finally sober and has been for nearly seven months. He was in the Marines for eight years, but even in the almost seven years since his discharge, he's only beginning to sit down and talk about the horrors of his three deployments with a therapist as he struggles with his post-traumatic stress disorder. He's grateful for Clint's forgiveness and friendship, as well as the help in getting a job as a contractor on base. Logan intends to make more than a good impression; he wants to do the best job possible, so distractions are no-go, especially one as tempting as Gunner's Mate Second Class Casey Olson. The chemistry between them is palpable, but will Casey's shattered dreams of becoming a SEAL and Logan's constant nightmares stand in the way of the two of them gaining love and peace.

Let's get to the good stuff first: I loved Logan and I liked Casey. Heck, I even liked them as a couple! They also had a small but great supporting cast in the likes of Clint, Diego Ramirez (from Once Burned), and Sarah, their co-worker. The story itself had potential went look at it piece by piece, what with Logan being a former Marine who's been sober for more than six months and suffers from PTSD and Casey having lost his shot at becoming the one thing he always wanted to be--a Navy SEAL. Where this book faltered for me was with everything that these two had to deal with yet not fully being able to delve as deeply as I would have wanted because there was so much going on. This may sound petty but I wasn't a fan of Casey's hypersensitivity regarding his SEAL non-experience and lack of sensitivity when it came to Logan expressing his thoughts. I get it; he missed his chance, but that doesn't give you an excuse to treat the guy you're intimate with like crap, especially after a PTSD episode. Ugh. So, that basically explains why I loved Logan and "only" liked Casey. This also had more of a happy-for-now ending to it, and now I'm unhappily going to have to give Wash Out 3.5 stars, which kills me. ♥