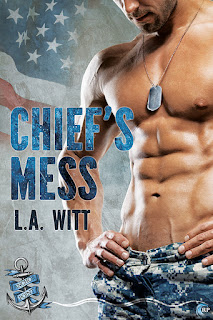 Do you really think it would bother me?” I asked. “Seeing you like this?”

Eyes down, he muttered, “I can’t imagine it’s much of a turn-on.”

“Which kind of implies I’m not just in it for the sex, doesn’t it?”

He hesitated, then looked in my eyes. “I guess it kind of does.”


L.A. Witt is back with the third novel in her naval romance series, Anchor Point, which has become such a favorite of mine ever since I first read Just Drive and its equally addictive sequel, Afraid to Fly. In Chief's Mess, we meet Chief Noah Jackson and Anthony Talbot, both in their mid to late thirties. Anthony's sole purpose in even being in Anchor Point is to give his sister, niece, and nephews some much needed moral support as they try to re-establish family ties with Anthony's ex-brother-in-law--who Anthony is wary about especially when it comes to his claims that he's not longer drinking. Needing a break from all the family drama, Anthony finds his way to a local gay bar and comes across Noah, who wasn't looking for anything other than a drink. But from the moment these two lock eyes on one another, there's just no pretending the connection between them doesn't exist. One hook-up extends to Anthony's entire time in Anchor Point...but even with Anthony returning to Colorado, these two are as addicted to each other as ever. Distance may be easy to overcome, but will Noah's drinking become their stumbling block?

While Chief's Mess is loosely tied to Afraid to Fly by way of Lieutenant Commander Clint Fraser, whose ex-wife is Anthony's older sister. If you've read the second book in the series, you'll remember that Clint had his own alcohol abuse issues. In this third book, Noah is highly functioning alcoholic who also happens to be very much in denial that he's got a problem when it comes to his overindulgence of his preferred beverage, whiskey. Noah is involved with Anthony, who has seen just how much damage alcoholism can cause a relationship. These two don't just have to navigate their long distance relationship and how it transitions from one-night stand to week-long fling to long distance fuck buddies to boyfriends. There's the whole matter of whether or not Noah's drinking is actually a problem or not and how they, as individuals and as a couple, will deal with it. Noah's alcoholism isn't always in the forefront of the story, but it's a lingering presence, one that you can't really avoid as well as either Noah and Anthony do. I think this worked best because it was like the dark, ominous black cloud hovering over the romance.

It's three for three with as far as my satisfaction is concerned with this series, and heck, saying I was satisfied seems insulting. From the moment I started reading this book on my tablet till the time I got to the expected happily-ever-after, everything else outside of Noah and Anthony's story was put on hold. These two--from the lustful beginnings of their romance to the implosion of it all when Noah's alcohol abuse was no longer a mere suspicion--had my complete attention. I liked that we also got to see how Clint and Travis--aka Lieutenant Commander Clint Fraser and Commander Travis Wilson from Afraid to Fly--were doing and the inroads made between Clint and his ex-wife and his children. We also get bits and pieces of Senior Chief Will Curtis, Noah's best friend and direct superior, whose own story will be told in the fourth installment in the series, Rank & File, which is scheduled for release in September of this year (and is already sitting prettily on my to-be-read list). Once again, L.A. Witt gives readers a hot and heavy but heartfelt romance in Chief's Mess, which I'm awarding five-plus stars to. ♥