Review: The Fangs of Scavo by Selina Kray (Stoker & Bash #1) 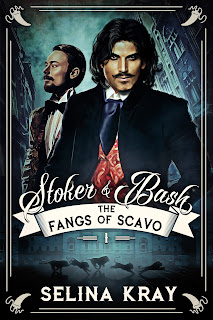 I was expecting one thing and got so much more with The Fangs of Scavo, the opening salvo in Selina Kray's Victorian-era mystery romance. This is also my first read from the author and this certainly had me sitting up in my seat and taking notice. Kray has offered up an undeniably well-written novel that had a unique mystery, two equally fascinating main characters who were tasked to solve said mystery, and a gaggle of gorgeously curious peripheral characters for support. It would be easy to say that this Stoker & Bash series starter was an opposites attract story, but that wouldn't do this novel justice nor give the author and all her fab work the credit it deserves.

Detective Inspector Timothy Kipling Stoker may be excellent at his job, but he's far from earned favor from either his superiors or his peers. Not sure whether his skills are best served trying to unravel the mystery of an amateur detective named Hieronymus Bash, he's tasked to do so. But when four fangs of Scavo go missing, Kip has no other option but to join forces with Hiero. Spiritualism and overly vocal mediums peddling it, demon cats who don't hesitate to go after humans, and a no-nonsense DI partnered with a consultant whose sense and sensibility are suspect. But Kip and Hiero will have to work together in order to get their answers before someone gets them first.

Fabulous mystery that kept me on my toes? Check. Enough hint of a potential romance to pique my interest for the rest of the series? Check. Two main characters that make me want more? Double check! This book did it's two most important jobs: it gave me a story that held my attention from start to finish and it whetted my appetite for even more. There's so much more to both Kip and Hiero that I'm already itching to see how their fledgling partnership--both professionally and otherwise--will flourish and falter as the series progresses. If the books to follow are as good as, or even better than, The Fangs of Scavo, I may have a new favorite on my hands. Five stars. ♥

Purchase The Fangs of Scavo on Amazon | B&N | iBooks | Kobo.