Review: The Shape of You by Felice Stevens 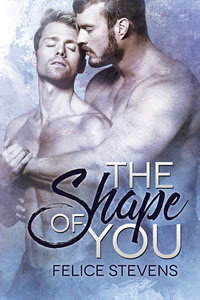 "What do you think? Can you deal with it? With me?"

Corey never once asked him to change or be anything other than who he was. The swell of happiness and peace settled inside, warm as a summer wind. And he loved Corey as he was now--wary and hurt, a bit broken and guarded. None of that stopped Eric's heart from knowing. Or loving who he did. He didn't want to change Corey at all.

Aaaaand I've just found my favorite Felice Stevens read ever! The Shape of You is her upcoming standalone and it's the unique story of two men who meet when they both sign up for a nutrition support group. Eric Sontag is overweight and his recent checkup has him worried that he'll end up just like his father. When he notices Corey DeSantis, Eric can't help but wonder why the skinny guy was even part of the group. But no one ever said that eating too much is the only reason one should worry about one's weight. It's Corey's lack of appetite and a trip to the hospital that has his boss pushing him to join the group. When Eric and Corey team up to keep tabs on one another's progress and provide support to each other, they forge a friendship with an underlying attraction that Eric is desperate to downplay. After all, what would someone as gorgeous as Corey want with an overweight guy like Eric? Corey has issues of his own, issues that are so deeply rooted that he's at a loss when someone from his past suddenly makes her presence felt. Corey leans on Eric but will the weight of his worries be too much to bear?

Whatever preconceived notions I had about what direction this story was going to go in and what kind of main characters Eric and Corey would be were thrown out the window from the first chapter onward. This was a story unlike any other I had come across recently, and this is coming from someone who reads A LOT. So, when I find myself in the presence of a book that gave me feels as well as inspired thoughts about weight and health concerns and issues, personal prejudices, and how lasting the affects of abandonment can be. By the time I had finished reading, both Eric and Corey owned pieces of my heart. I empathized with both men and while they may have seemed like they didn't fit, they were exactly what the other needed. Witnessing their evolution throughout was inspiring. I needed a tissue or two at certain points. Suffice it to say--and I know it'll sound cheesy--Ed Sheeran was right because I'm in love with The Shape of You. I believe this is Felice Stevens's best work to date. Five-plus stars! ♥

There are currently no pre-order links for The Shape of You. It will have a live release.