Review: The Knocked Up Plan by Lauren Blakely 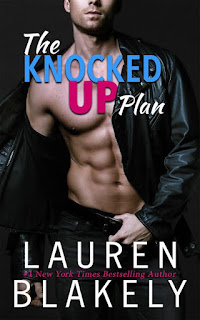 “For taking care of me tonight.”

“It’s the only place I wanted to be.”

Lauren Blakely knocked it out of the ball park with her latest romantic comedy effort, The Knocked Up Plan, which was originally titled The Wild One before it was published and was part of The One series. I'm now considering it a spin-off of the aforementioned series, but whether it's a standalone or part of a collection of loosely connected books, this story of two friends and co-workers who come to an agreement--one that involves getting pregnant with no strings attached. But you know how these things turn out, right? Well, prepare to be surprised, because while the ending is guaranteed to be a happy one, Lauren Blakely is an author who has never failed to give even the most used and abused of tropes a refreshing twist and creative touch, thereby making it her proverbial bitch.

Ryder Lockhart and Nicole Powers work in the same radio station, both hosting shows that offer up advice on love and dating and everything in between. But Ryder no longer believes in love, not after his ex took his heart and chopped it to bits. On the other hand, Nicole may not be looking for love, but what she is taking notice of is the ticking of her biological clock. She wants a baby and she wants Ryder to be her sperm donor, and he surprises her by agreeing. However, Ryder has one particular caveat: he thinks it would be best to handle the baby-making the old fashioned way. After all, why not enjoy the labor before it bears fruit. It's just sex. Really hot sex. But then he begins to fall for Nicole. Now, Ryder needs more than friendship and sex. He wants the baby and his baby mama.

Who do I see to have more Ryder Lockharts in the real world? I mean, seriously! This man was just...GAH! He wasn't perfect and he knew it, but he was genuine and honest and he adored Nicole even when they were still only friends. She was the one who managed to unlock his heart (see what I did there?), but it wasn't in this overly sappy, overly done way. She may have needed his help--his sperm, in particular--but she wasn't this simpering girl whose life was unfulfilling before he came along. Nope, Nicole was her own woman. They had their respective lives, and while those lives were not exactly perfect, they weren't exactly terrible either. I think of it as Ryder and Nicole feeling unfulfilled in certain areas and they became each other's perfect catalysts for change and fulfillment.

These two had such a wonderfully unique story, filled with whimsy and wit. I smiled and laughed and simply fell in love with Ryder and Nicole and their tale of friendship, getting knocked up, and finding love. I didn't think it was possible, but the book got even better when Papaya came along. And did I mention Romeo and Ruby? Could this rom-com get any better?! I know I haven't read ALL of Lauren Blakely's books--I think I've read a dozen so far, including this latest one--but I dare say that this is her best one yet, or at least, the best one that I've read. The humor feels natural, the romantic and sexual chemistry believable, and the reader satisfaction warranted. I hate to play favorites--I totally do!--but The Knocked Up Plan is my favorite Lauren Blakely read, and it gets five-plus stars. ♥

Purchase The Knocked Up Plan on Amazon | B&N | iBooks | Kobo.