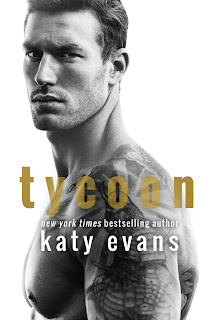 Over the span of thirteen previously published books--seven of which I've already read and nearly all of which I enjoyed--Katy Evans has proven to be an author many a romance reader can rely on to come up with a story worth reading. With her fourteenth and latest release, a standalone entitled Tycoon, is a kinda-sorta-maybe second chance romance between aspiring entrepreneur Bryn Kelly and real estate magnate Aaric Christos. I did kinda-sorta-maybe like this book, but it lacked that oomph that I was looking for and that I've come to expect after Evans's recent fantastic efforts, i.e. her White House series. I'm not saying Tycoon was a terrible read. I actually did enjoy it in an overall sense, but with the author having the established reputation the she has, my standards for her are higher and this faltered in terms of creativity, following instead an overly expected and too used direction.

Bryn Kelly wants to get her business off the ground, but in order to do so, she needs one vital thing: start-up cash. Unfortunately, she doesn't have, but she's got a plan and it involves one of the wealthiest tycoons in New York, Aaric Christos. The good? Aaric and Bryn were friends years ago. The bad? Bryn rejected Aaric's romantic overtures years ago. It doesn't matter that she had feelings for him just like he did for her. But she's hoping his business sense will take over and that he sees that what she's proposing is something worthwhile after all. This adult and far more successful version of Aaric is brutally cold and calculating, but there are tiny glimpses of the boy who once captured Bryn's imagination and professed to want her. Aaric still wants Bryn, and this time around, Bryn is fully tempted to give in to the mutual desire. But what will giving in and falling for Aaric cost someone Bryn in the end?

Hands down, my favorite thing about this book was Aaric. He was the kind of alpha male who wasn't full of himself or thought he was God's gift to the rest of mankind or womankind. Bryn, on the other hand, I was feeling rather ambivalent towards, and it wasn't entirely because of her decision to become involved in one form or another with Aaric while believing he was still in a relationship. I wanted her to be as worthy of Aaric as Aaric was of her. There was just something missing. Now, as far as the story was concerned, like I mentioned earlier, this simply felt overly familiar, a basic story line that I've come across numerous times--no surprises, no "oh wow" moments, nothing that sets it apart or makes it feel distinctive. Again, let me reiterate that Tycoon was a pretty good read, but this was a Katy Evans-penned novel, and "pretty good" simply left me wanting, so I'll be giving this standalone 3.5 stars. ♥