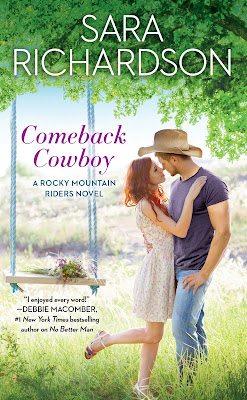 About Comeback Cowboy
A WOMAN NEVER FORGETS HER FIRST COWBOY . . .

As a single mother, Naomi Sullivan is used to doing things on her own. She's finally saved enough from working at the Cortez Ranch to buy a lovely home for her and her little girl. Life is going as planned. But when her high school sweetheart comes riding back to town, this self-sufficient woman feels something she hasn't felt in years: red-hot, unbridled need for the handsome cowboy who left her behind.

Lucas Cortez doesn't plan on being in town long. Yet when he sees Naomi again—the gorgeous girl he never stopped loving—he's tempted to hang up his hat and stay awhile. He's already charmed his way into her daughter's heart, but he'll need more than sweet talk and roses to convince Naomi to give them a second chance-especially when she's hiding a secret that could change their lives forever… 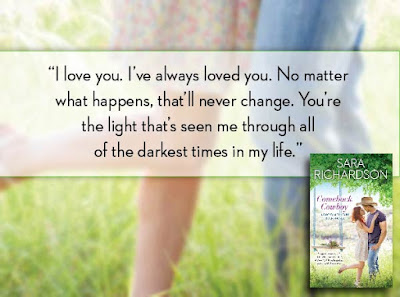 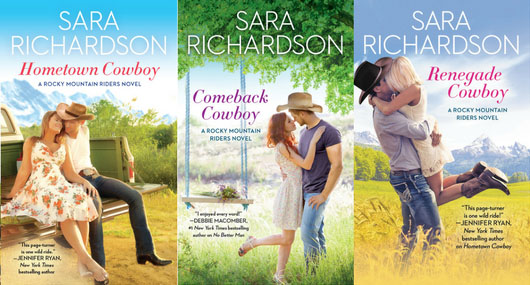 He watched her draw closer and closer, and just like it always did when Naomi got near, his heart picked up. Would she stop and give him a lift to the ranch? They hadn’t exactly been alone since he’d come back to Topaz Falls. She’d made sure of that.

As the yellow car sped around the curve, he lifted a hand to flag her down, but the car didn’t slow. Maybe she hadn’t seen him. Waving his arms, he stepped onto the shoulder…

Shit! The car was coming right for him! Adrenaline fired through him and sent him rolling into the ditch just as the car’s brakes screeched. The thing skidded and fish tailed, likely taking out half of the tires’ tread.

Breathing in the scent of burnt rubber, Lucas stared up at the sky. Well, that’d been one hell of a close shave.

The car door opened and out Naomi flew, stumbling down the embankment in her polished red heels, to where he lay on the ground.

“God, Lucas. I was so distracted I didn’t even see you.” Her delicate hands covered her face. “My god, I almost hit you.” She staggered a few steps.

That got him off the ground. “Hey.” He hurried over to her, brushing the gravel off his ass. “I’m fine.” He’d been through a hell of a lot worse than a tumble down into a ditch. “See. No blood. I’m good.”

She nodded, but seemed to be on the verge of hyperventilating. Which meant she was in no condition to get behind the wheel of that car.

“Why don’t I drive you back to the ranch?” He slipped an arm around her waist to support her, and he couldn’t resist drawing her close to him, closer than she’d been in ten long years. She still smelled like carefree summer afternoons—a subtle hint of lemon along with the coconut oil she used to use to soften her hands. That scent, the feel of her leaning into his body, roused a sudden overpowering greed. He’d never hungered as desperately for something as he hungered for her. To turn her fully to him. To feel those breasts he used to kiss so intimately against his own chest again. He knew that body, remembered every curve and bend, every fine detail…

Of course she could. But she did hand him the keys before hurrying to climb into the passenger’s seat without his assistance.

Lucas folded himself into the driver’s seat. “All right, then. We’re off.” He started the engine and backed up, then turned carefully out onto the highway.

He stole a glance at Naomi. Her soft lips twitched as he studied her. It wasn’t her full, bright, beautiful smile.

But it was a start. 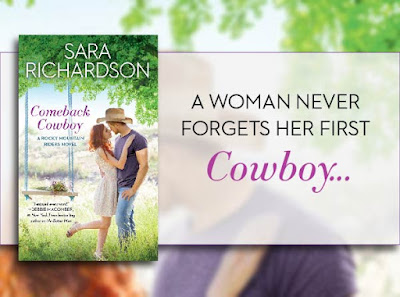 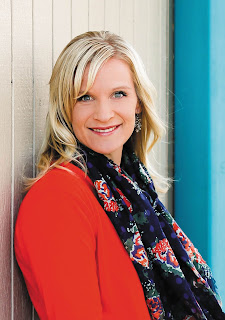 Sara Richardson grew up chasing adventure in Colorado's rugged mountains. She's climbed to the top of a 14,000 foot peak at midnight, swum through Class IV rapids, completed her wilderness first-aid certification, and spent seven days at a time tromping through the wilderness with a thirty-pound backpack strapped to her shoulders.

Eventually Sara did the responsible thing and got an education in writing and journalism. After a brief stint in the corporate writing world, she stopped ignoring the voices in her head and started writing fiction. Now she uses her experience as a mountain adventure guide to write stories that incorporate adventure with romance. Still indulging her adventurous spirit, Sara lives and plays in Colorado with her saint of a husband and two young sons.