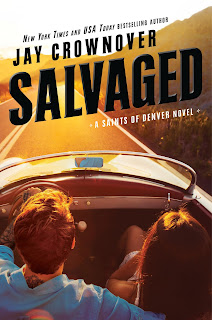 Salvaged is the much awaited fourth--and much dreaded final--full-length novel, though fifth overall, released in the Saints of Denver series by bestselling author Jay Crownover. Hudson Wheeler and Poppy Cruz know what it's like to have their lives upended when the people who were supposed to love them most turned out to be those who hurt them the deepest. When they met for the first time, Wheeler had just gotten engaged and Poppy was barely coping with the aftermath of her abusive marriage and the events that followed the end of it. Months later, Wheeler's engagement is off after his fiancée's betrayal and is trying to wrap his head around the fact that she's pregnant with their child. The last thing he needs is the responsibility of a taking care of a rambunctious puppy, but how can he say "no" to Poppy, the very same woman who's had his attention from the get-go? He wants nothing more than to gain her trust, and while Poppy is still finding her footing, there's something about Wheeler that has her lowering her walls. Is what's left of their hearts enough to be salvaged for something better for both of them?

It's always a bittersweet moment when you know you've come to the end of a series that you've loved from the beginning, and that was exactly the case with this Saints of Denver series ender. Poppy and Wheeler were familiar peripheral characters and they've both been through a lot in terms of their respective back stories, so of course these two deserved a happily-ever-after of their own. Reading the other books in the series before reading this one will give you a better appreciation for how far Poppy has come. When she decides to open herself up to Wheeler and to the possibility of engaging in something more than a hesitant smile or quick glance, it was so satisfying because you could see her transitioning from "victim" to "survivor". She made the choice to live a fuller life, one that had her falling in love with someone who truly respected her, and that someone was none other than Wheeler. This guy was amazing, whether it be with Poppy or Happy the puppy or even his ex and the surprise revelation that comes into his life. Salvaged wrapped up the Saints of Denver series in a satisfying, five-starred way. ♥

Read my reviews for the Saints of Denver series: