Review: Too Close to Call by Tessa Bailey (Romancing the Clarksons #3.5) 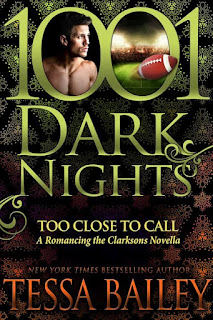 Too Close to Call is a novella in the Romancing the Clarksons series from bestselling author Tessa Bailey but it can be read absolutely independently of the full-length novels. My feelings for the first three novels that have already been released have been mixed, but this "little" gem had me from the get-go. If you're familiar with the series, you'll recognize All-American wide receiver Kyler Tate from Too Hard to Forget, and he certainly was an unforgettable side character who more than piqued my curiosity. Tessa Bailey did his story justice, giving readers a second chance love story with a dash of football and a whole lot of small town charm plus a determined hero who wants nothing more than to have the only girl he's loved by his side as he pursues his dream of playing in the NFL.

Kyler Tate and Bree Sutton have been in love since middle school, but while Kyler always knew the two things he wanted in his life--going pro and being with his girl--Bree decided she couldn't live with the trappings that came with Kyler's lofty football ambitions, deciding to end things before they went their separate ways for college. Four years later and having been drafted into the pros, Kyler can't help but feel something--someone--is missing, and he decides to head back to his hometown in Indiana and make the biggest play of his life: to convince Bree to rekindle their relationship and say "yes" to going with him to Los Angeles. But when Bree broke ties with the boy she still loves, she had no intention of changing her mind. However, she underestimated her Kyler's dogged determination.

Could any guy be more perfect than Kyler Tate? I mean, come on! This isn't fair to the real life male population because if females encountered Kyler in their fictional forays, who wouldn't want a living and breathing guy like him? He was the best and my favorite thing about this novella. Of course, that isn't to say that the rest of the cast of characters or the story itself fell short. As a matter of fact, everything just clicked as far as I was concerned, although if we're being absolutely honest here, I had to suspend my cynicism with how noble and ideal Kyler was and how everything played out. This story had a lot of heart and surprised me because it was more sweet than steamy, something I'm not used to with Tessa Bailey's books. Too Close to Call is my favorite in the series. 4.5 stars. ♥

Purchase Too Close to Call on Amazon.