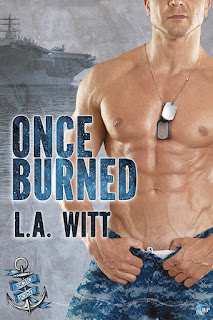 So do I give it a shot? Or do I let the Navy win again?

I looked in Mark’s eyes. He was Navy. Career fucking Navy. And I just kept on coming back.

When he smiled, the warmth spreading through me was almost enough to negate the twisting in my stomach.

Because I don’t want to.


I make no secret of the fact that I am obsessed with the Anchor Point series, and six novels in and I remain as hooked as ever to the stories coming out of the naval base located Anchor Point, Oregon. Book six features thirty-nine-year-old Diego Ramírez, who was introduced in the fifth book as an ex of one of the main characters. Diego is a bartender at the High-&-Tight, the go-to gay club in the small town. He also happens to be a veteran who had his green card expire while he was recuperating from injuries sustained while in Afghanistan. Now undocumented, he is forced to work illegally and is unable to avail of any benefits owed to him for his years of service in the Navy, which is why he's got an aversion to starting anything with active Navy serviceman until one captain comes along...

Forty-two-year-old Captain Mark Thomas was months away from retirement, but in a short span of time, he finds himself being promoted as the executive officer of the Fort Stevens and agreeing to a divorce from his wife of nearly two decades. Moving to Anchor Point is just one of the changes he's facing, but discovering a gay club in the area could be his chance to, at the very least, scratch an itch. From the moment he notices the hot guy behind the bar, Mark is smitten. One night results in more nights together, until both Diego and Mark find themselves spending more and more time in each other's company. Neither one was looking for a relationship, but the more committed they become, the greater the risk for inevitable heartbreak, and Diego is wary of getting burned again.

While the stories in the Anchor Point series do share certain similarities, I can't help but applaud how L.A. Witt has managed to distinguish every single one of the books. Mark and Diego's story is timely, especially given a news story from less than two weeks ago about an Army veteran who served two tours was deported to Mexico. The fact that this was just the latest veteran to have been deported spotlights a sore and sensitive subject. What I appreciated most with regards to Diego's situation was that it isn't simply one viewpoint that readers are privy on. Mark's commanding officer points certain things out, the most notable being Diego not filing for citizenship while he was enlisted, which is a point well taken. However, deporting veterans is an issue that demands more empathy.

It would have been so easy for the author to have made the deportation topic a highly political one, but she didn't. At the end of the day, this goes beyond politics, and the manner in which it was resolved in the book was one that I recognize as being more realistic while still being romantic. Mark and Diego may have been two men who were merely into the temporary and ended up wanting something far more permanent, but they had challenges that may have seemed insurmountable to many. I've read more than a few of L.A. Witt's books and even listened to a couple of standalones, but there's no denying that her Anchor Point series is my favorite, and with two more novels to go, I can only hope that they're as fantastic as the six that came before it. Five-plus stars for Once Burned. ♥