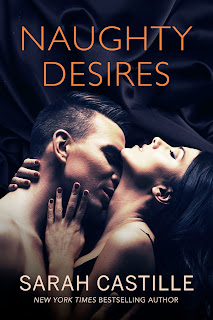 Bestselling author Sarah Castille is back with a collection of quickie reads called Naughty Shorts, which is a more than apt name for the series since these stories are shorter in terms of length and if the rest follow suit to the series starter, than they're very naughty indeed! Book one is entitled Naughty Desires and it finds married couple Chris and Lily unsure as to how to move forward after their relationship has hit an all-time low. After Chris lost his job as an accountant after the company he was employed at downsized, he was forced to go from white collar to blue collar, accepting a job in construction. This also has Lily taking on two jobs in order to keep them afloat. So, maybe it shouldn't be all that surprising that he's been less than enthused once he's home. But after a year, things have gone from bad to worse, and it may take a kinky dentist to shake things up for them.

I've read four of Castille's series, so I'm familiar with the quality of writing she's able to produce. For a short read, she's able to pack quite a punch in this new book of hers. Chris and Lily are an interesting couple and the problems that they experience in their marriage are familiar ones, so it's also easy to empathize with and relate to them. Dr. Aidan Steadman, oh-so-naughty dentist about town is a peripheral character but he doesn't necessarily steal the spotlight from our main characters. These two have their ups and downs, but they're also very hot together. And can I just say that I loved that they already had an established relationship, helping to set this book apart from other quick reads that rely way too heavily on insta-everything? Castille doesn't disappoint, and with Naughty Desires taking less than an hour to be read, this four-star novella easily satisfies. ♥