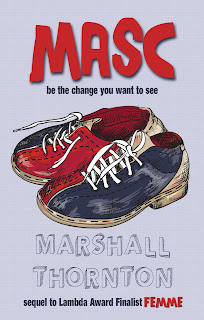 Well, I could keep my secret—and I did think about it—but it was going to make me kind of an asshole if I did. And for some obscure reason I didn't to be an asshole. Seriously, I think life is easier for people won't care if they're assholes or not. But I guess love makes us stupid.

After devouring Femme in one sitting, I immediately jumped into Masc, and Marshall Thornton does Lionel Gilman and Doug "Dog" Benson's continuing love story justice with this rom-com gem of a sequel. Picking up a few months after the events in the first book, Lionel and Dog continue to be in a committed relationship. Lionel still works as a bartender and Dog a cardiac arrest test administrator. They're surrounded by people who love and support their relationship. However, one listicle--a list masquerading as an article or vice-versa--has Lionel wondering if their months-long relationship is doomed. Sure they check off almost everything on the list, but they don't exactly have much in common, so how are they supposed to last? Why, share an activity, of course! Like...bowling? But when Dog attracts the attention of a fellow masc gay guy, trouble looms for him and Lionel.

Can I just reiterate how much I adore Dog and Lionel? These two and their sweet and silly love story brought a smile to my face numerous times with this follow-up. Thornton could have left their story as it was with Femme. After all, writing a sequel isn't necessarily an easy thing, especially when it comes on the heels of a book that was well-received by readers and critics alike plus recognized by award-winning bodies. Lo and behold, the author gives these two unforgettable main characters a second part to their love story, and it was every bit as entertaining, endearing, and enjoyable as its predecessor. Dog and Lionel are still very much in love, and everything seems peachy as far as the rest of their world is concerned. Heck, even Dog's dad is more receptive to their relationship. However, every relationship has its challenges and those will either break you or, well, not.

Once again, I loved that this sequel made me feel AND think. There's an incident concerning sexual harassment in the workplace, and I appreciated how it reminds readers that this kind of harassment isn't limited to that between a female subordinate and her male superior. It can and has happened with a female with more power than the male, and it's not just between two straight people either. Harassment is harassment, regardless of the sexuality of the people involved. I applaud the handling, and would've given the actions of one of the main and one of the supporting characters standing ovations had I not been sick in bed. On a side note, I hope that Lionel's best friend Carlos is able to have a happily-ever-after of his own and that we'll be able to read all about it. Hint, hint! Masc gets five-plus stars, and I suggest you read the books in order even if they are standalones! ♥

Read my reviews for the Femme series: