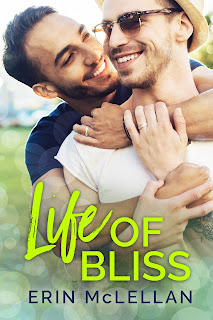 After I had finished reading Life on Pause six months ago, I hoped that two supporting characters would have their own story told, and I guess this was a case of "ask and you shall receive"--and not a case of "be careful what you wish for"--because quite a few and asked, and by golly, Erin McLellan is giving us exactly what we were wishing for! Life of Bliss is the second novel in the Love Life series and it's all about frenemies Victor Consuelos and Todd McGower, Niles Longfellow's platonic soul mate and Rusty Adams's ex-boyfriend and best friend, respectively. This was every bit as quirky and as charming as I was expecting it to be but Victor and Todd's story had its surprises too!

Victor Consuelos and Todd McGower don't like each other. Hooking up with each other, well, that's something they like a whole lot of. Victor thinks Todd is too preppy, too perfect, and too full of himself. Oh, and he's had a mad crush on the guy for months, and it's distracted him to the point that now it's too late for Victor to find a plus-one to his cousin's wedding--a plus-one he already told his mom and aunt he'd bring. Imagine his surprise when Todd offers to accompany him to the weekend-long festivities as his pretend boyfriend. Todd's looking forward to spending a few more days away from Bison Hills and with the guy he can't stop wanting, and Victor will be spared pitying looks from his family. Everything should go according to plan. Getting married, though, was never part of it.

From the moment Victor and Todd crossed paths because their respective best friends had fallen in love and became boyfriends, I just knew that chemistry between them needed to be explored further, and Erin McLellan stepped up to the challenge quite nicely. From the snarky back and forth to the hot encounters, these two, like I mentioned in my review for Life on Pause, turned out to be explosive. They also happened to have their fair share of sweet moments as well, along with a hint of angst due to their respective insecurities and issues. For all their bravado, both Victor and Todd were a surprise the more I got to know them in this book. Their love story was also unconventional, but no one ever said there was only one road to happily-ever-after, right? Three books in and Erin McLellan continues to impress with her brand of storytelling. Life of Bliss was a blissfully satisfying five-starred read. ♥

Read my reviews for the Love Life series: