Review: When Stars Burn Out by Carrie Aarons 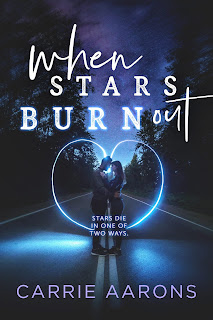 Carrie Aarons gives fans and readers a second chance love story set in the world of professional football with her newest standalone release, When Stars Burn Out. It may have been a decade ago when Demi Rosen met and fell for Paxton Shaw only for him to leave her behind just two years later without a word of goodbye, but the impact he had on her life has made her into the very woman she is today--protective of her heart and keeping men at a distance. Both thirty, she's the CEO of Wish Upon a Star, an organization whose mission it is to make the wishes of critically- and terminally-ill children come true, and he's the all-star tight end whose coming to the end of his career after a bad injury. He wants a chance to make amends; she simply wants him to leave her be.

Having been traded for the first time in his career, Paxton finds himself back in his college hometown and crossing paths with the girl who was his booty call for two years in college. He's the first to admit that he didn't treat Demi the way that she deserved, and it's clear from her cool reception to his return to North Carolina that she's changed a great deal. Where there was a time that all he had to do was send her a text and she'd drop everything to be with him, now Demi barely wants to give Paxton the time of day. But the past eight years and devastating loss has changed Paxton as well, and he's bound and determined to convince Demi that he's committed to pursuing more between them. Will the stars shine bright or burn out for these erstwhile lovers?

From the moment I discovered Carrie Aarons's writing by way of her Flipped series back in 2016, I've found myself enamored and entertained by the author's romantic fare, and her latest one is definitely one of my favorites so far. There was no sugarcoating of Paxton's bad behavior when he and Demi were back in college. He truly treated her like nothing more than the girl he was hooking up with. She was, as far as he was concerned, a temporary distraction from football and school. In short, he was a jerk, and he very much earned her ire and distrust. On the other hand, it would be easy to Demi as nothing more than a groupie, but she wasn't into Paxton for the money or fame that he was already destined to have. She truly had feelings for him.

Both Paxton and Demi had their stumbles and failings, and I appreciated that they weren't made to appear like impossibly perfect main characters. I loved that the Paxton we meet at thirty is far more humble and centered and that Demi at thirty is a woman who has found herself and purpose. The fact that neither one of them overly compromised the people they were at present in order to be together was something I got behind because to me it meant that they had grown enough as individuals to be in a better place to grow us a couple. Having  flashbacks provided a way to compare who Paxton and Demi were before to who they are today, making for a far richer love story. Five-plus stars for When Stars Burn Out. Dare I hope for Dylan Shaw to get his own story? ♥

Purchase When Stars Burn Out on Amazon.