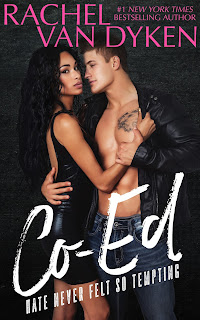 “What?” Her eyes searched mine.

I wanted to close her off, to keep the truth locked down just a little while longer. “You’re innocent,” I breathed out. “I’m not.”

As much as I loved the Wingmen Inc. books--The Matchmaker's Playbook and The Matchmaker's Replacement--the new spin-off novel took me by surprise while I took a piece of my heart with it. I've read a couple of harem and reverse harem type books before, and while they were okay, I wouldn't be able to tell you anything about them other than the fact that yes, I've read the tropes before. Co-Ed employs the basic idea of a reverse harem in that there's one female main character and then there are four guys whose lives she touches and changes for the better. If you're expecting orgies, however, might I suggest you look elsewhere. I'd give you the titles of those books that I mentioned earlier; alas, I can't remember their titles. If you're hoping for a story that has humor with a hint of angst and a whole lot of heart, then let Shawn, her roommate Slater, and the Pleasure Ponies--aka Knox, Leo, and Finn--tell you their story as they share one suite in their college dorm in Rachel Van Dyken fashion. And while you won't be getting any orgies here, you do get a hell of a lot of sexual innuendo, tension, and gratification.

With a name like hers, it's understandable why Shawn would be assigned to a suite that had four guys in it. She shares one bedroom with a guy named Slater who seems oddly attached to a stuffed unicorn named Horny. The other bedroom has three occupants that her roommate has nicknamed the Pleasure Ponies, two of whom are confident and charming, and one who is as enigmatic as he is frustrating--Leo and Finn and Knox, respectively. The goings-on next door have Shawn curious as to what it is that has visitors coming and going and moaning in between. The Pleasure Ponies turn out to be the latest edition of Wingmen Inc., a paid service meant to aid clients with relationship woes. What used to be a foursome, however, became a trio three years ago, and the frisson of animosity coming from Slater isn't easy to ignore. He warns Shawn from getting close to their suitemates, but Leo and Finn are friendly albeit a bit flirty. Knox, however, blows hot and cold. There's an undeniable connection, and while Knox knows pushing Shawn away would be best, he can't resist the hope and redemption the new girl offers.

I have a thing for Rachel Van Dyken's new adult (NA) romances because her characters feel like they're actually the college-age individuals I expect them to be. They're in that cusp between being responsible, mature adults and still having hints of being the teenagers they were not so long ago. Van Dyken pulled off one hell of a story involving a new student and four guys who used to be the closest of friends. I adored Shawn because she had that air of vulnerability to her yet her backbone wasn't one that was easily bowed either. She was thoughtful and weighed things out but she was also instinctual. Among the four guys, it was Knox, of course, who stood out. He's the poster child of not judging a book by its cover because while he may have come off as a complete jerk to Shawn in the beginning, the guy knows loss. I loved seeing that sweeter, more caring side to him. Then there are the three others--Slater, Leo, and Finn--each of whom has me hoping that they, too, will be getting their stories told. Wishful thinking? Maybe, but with a book as good as Co-Ed, the demand for more is too inevitable. This gets five-plus stars. ♥