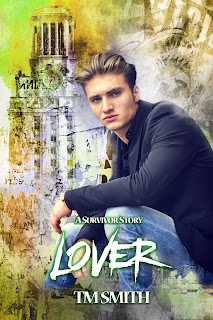 Lover is the second novel in the Survivor series written by TM Smith, and features yoga studio co-owner and teacher Shannon Dupree, federal agent Rory Landers, and police detective Rand Davis, all of whom were supporting characters in the first book, Survivor. While you may be able to read this new release without having read the series starter, I'm going to recommend that you still read the previous novel anyway because there are a whole bunch of recurring characters and a story line or two. However, the author does provide enough of a look back into what happened in book one that a new reader won't feel too lost or feel like they're missing a whole lot.

Shannon Dupree left behind an abusive relationship but has found stability years later, thanks to his best friend Taylor Langford. Shannon's even found love with FBI Agent Rory Landers, who's both protective and supportive of the younger man. After Taylor's case, Rory finds himself still working with the Dallas Police Sergeant Rand Davis on a cold case that has the entire team intrigued and in desperate search for the person behind the disappearances and murders of several young men over a number of years. Things become even more complicated when Rand becomes attracted to both Shannon and Rory, an attraction that may very well be reciprocated by both those men.

I confess that I'm wary when it comes to stories that involve three-sided romances. I'm picky when I decided to read one, and it's rare that I'll come across one that I fall absolutely in love with. I need to believe that all three parties have the same level of commitment to one another. The thing with Shannon, Rory, and Rand's story is that their "relationship" didn't feel as if it truly went through any sort of development. I didn't feel the romance or even a kinship until everything regarding the case that Rory and Rand were investigating unraveled. I wish the attraction had been explored on a deeper level, but I give kudos as far as the mystery suspense is involved. 3.5 stars for Lover. ♥

Read my reviews for the Survivor series: