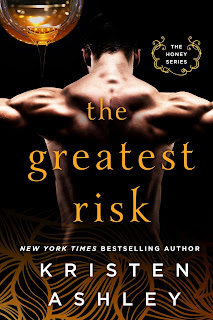 "I can give you beauty," he clipped irritably.

"What I don't understand, baby," she whispered, "is why you think I deserve it."

She was lucky she called him baby.

But not that lucky.

"If you ask me that question in a month, darling," he drawled, "I'll walk away from you, and you'll never see me again. That is my vow to you, Simone. By the end of the month, I'll make you understand. Now I'm done talking. Site beside me, fucking cuddle into me, and relax in front of the goddamned fire."

Kristen Ashley saved the best for last with the third and final novel in her Honey series--the very same series that pushed the boundaries of her storytelling as well as her fans and readers out of the their comfort zone and into a world of pleasure and pain when it came to a lifestyle that saw Dominants and Dominatrices finding love with those who embraced their submissiveness and discovered the sublime with love. The Greatest Risk is the story of thirty-nine-year-old Stellan Lange, the Master whose heart has yet to be claimed--a heart thirty-three-year-old Mistress Sixx has wanted for her own ever since she first saw him. In as much as Sixx believes that Stellan would never even consider being with someone like her, she's shocked when he makes his intent clear. Stellan not only wants Sixx to submit to him, but he wants Simone Marchesa, too. The Master desires both the Mistress who knows how to play with her subs and the complicated and damaged woman that barely anyone knows. But can a Dom and a Domme compromise and sacrifice what they need for what they ultimately want?

Stellan and Sixx's love story is one that's got its complexities mixed in with the one very simple and undeniable fact: they both want each other. I really liked getting to know these two better, especially since they've been such constants in the first two novels. Their back stories are heartrending, and I love how they've got a firm support system in place, even if Sixx isn't as aware as Stellan wishes she were that she does have people who care for her. There's nothing easy about their journey to happily-ever-after, given that Sixx had a bad tendency of self-sabotage and thinking she wasn't deserving of happiness, but Stellan certainly wasn't the type to back down from a challenge. The guy gets a lifetime of bonus points for going above and beyond countless times over, and not once did he ever make it seem as if Sixx owed him. He simply did what he thought was best for the woman he loved and their future together. There was nothing common nor ordinary about this last Honey novel, and while I will miss the series, Kristen Ashley ended it with a five-plus-starred read in The Greatest Risk. ♥

Read my reviews for the Honey series:

The Deep End (book one) - four stars - My Review