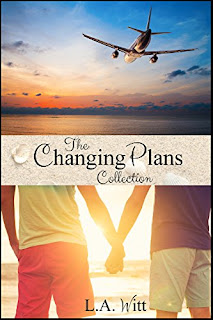 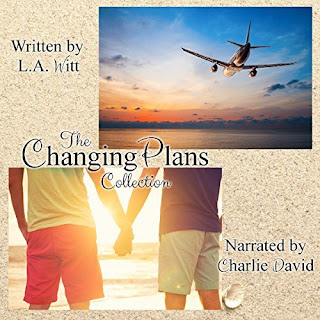 Note: The audiobook was provided by the author via Signal Boost Promotions in exchange for an honest review. The ebook is a personally owned copy.

I've liked many an L.A. Witt book, and her Changing Plans Collection certainly isn't the first from the author in which I had both the ebook and the audiobook, but it is the first from her wherein I read and listened to the story at the same. I've had the ebook since December 2014; alas, I had forgotten that I already had it. I know, I know. This is more proof of how much of a book hoarder I am. It may have taken me three years and four months, but I finally realized I had the book and I got to listen to the audiobook as well! Better late than never!

Both the latest ebook edition and the audiobook for The Changing Plans Collection were released in 2016--August for the ebook and October for the audiobook. The collection consists of three novellas: Getting Off the Ground, Infinity Pools, and On the List. The series centers on the unique love story of Seattle native Elliott Chandler and Hawaii resident Derek Windsor. A snowstorm has Elliott's flight to Oahu getting delayed several times--the same flight that was supposed to take Elliott to his honeymoon before his fiancé left him at the altar.

Elliott's always been a planner, and a flight that's bound to get canceled is something he didn't plan on. Neither did he plan on meeting Derek. But there's something about the man with the easy but sincere smile and the friendly but flirty manner that has Elliott tempted to throw caution to the wind. Elliott's six-year relationship has just ended and Derek admits he isn't one for commitment, so what's the harm in hooking up while waiting for the storm to blow over? Plans often change, but who'd have thought it would lead to a life-changing two weeks?

I thoroughly enjoyed Elliott and Derek's story. From their first meeting at the airport to their impromptu two-week furlough from their usual lives and then to their inevitable parting of ways, I found myself becoming increasingly invested in the romance and the ultimate outcome. The first two parts of the collection are told from Elliott's point-of-view, and then switches to Derek's in the third and final part. I loved the direction the story took, and how it did feel like everything had circled back to Seattle by the time we get to the end of it all.

Just like Elliott and Derek were escaping from the realities of their everyday schedules, Witt has written an M/M romance that's the perfect book to escape with when one wants to take a break from the humdrum of whatever they're doing. The ebook itself gets an easy five stars, but I did have to take it down a star for the audiobook because of the narration, which I wasn't a fan of. While I do give Witt's story five stars, the narration only gets three stars, giving the audiobook an average of four stars. So, if I had to choose which one to recommend, I'd have to go with the ebook edition. Either way, I do hope you'll give Witt's The Changing Plans Collection a whirl! ♥