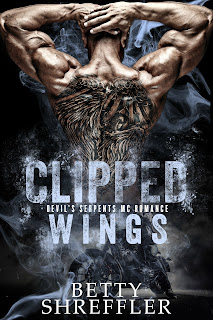 Clipped Wings is the second novel in Betty Shreffler's Kings MC series. I must note, though, that while it is part of that series, any appearance by eponymous motorcycle club is limited to a couple of cameos from certain notable members. Instead, story here revolves around the Devil's Serpents MC, which is a club that Dominic Xavier is the VP. It's also the club that owns the house that eighteen-year-old Erika Daniels and her older sister Amberlee and mother Dori live in, which is why the constant presence of club members shouldn't be all that surprising. Erika isn't as receptive as her sister to the advances of these men who think she owes them something. However, she wouldn't mind having Dom's attention solely on her. She's young and naive, but Dom can't seem to resist Erika, and making her his could very well be an inevitability. However, it seems that not everyone is thrilled by Erika becoming Dom's woman. She's in for a shock when the reality of club life hits her, and how prepared is he to protect her, especially if it may mean having to go against everything he believes in?

This is my second read from Shreffler, and it was as enjoyable as Castle of Kings, which was the Kings MC series starter. Just a quick note: Jake Castle from the first book and Dominic Xavier from the second book are cousins, so that's what connects these two novels. There's a lot of raunchy sex between Dom and Erika as well as the brand of romance that seems to be par for the course for the series. This has quite a bit of angst when it comes to Erika's relationships with her mother and sister, though more the latter because they're far closer. We certainly get a different story here from the one in the first book, which is obviously a good thing. While I wasn't overly shocked by anything presented in terms of the MC life, I do wish, though, that there had been word of caution or a trigger warning including because there is one incidence of rape, a couple of attempted rapes, and one sex act that I considered had dubious consent. That aside, Clipped Wings gets four stars, and I hope we learn the future of the Devil's Serpents MC, especially Mercy's, and get more of the original Kings MC. ♥

Read my reviews for the Kings MC series:

Castle of Kings (book one) - four stars - My Review