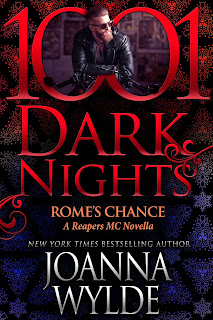 Rome's Chance is the newest addition to bestselling author Joanna Wylde's Reapers MC series, with the novella taking place about eight years after the events in the last full-length novel, Reaper's Fire. Rome McGuire and Randi Whittaker were already introduced in that previous story, and now they may finally get a shot at having the kind of happy ending that Gage and Tinker Cooper fought their way through. You don't necessarily have to read any of the previous of Reapers MC books in order to fully enjoy this new release, but this happens to be one of the best written motorcycle club romance series around, so I suggest you check those other books out.

The last time Rome McGuire saw Randi Whittaker, it was after she had been on the back of his bike. When a devastating fire forces Randi and her family to move away, Rome wishes he had taken his shot at laying claim over the girl he's always believed was his. Eight years later, Randi is back in town, and while she may not be the shy and timid twenty-year-old she was before, Rome's feelings for her haven't changed a bit. He's already squandered his chance with her twice, and she may only be staying with family and a reunion for a few days, but Rome intends to make sure that Randi realizes that the only place she belongs is in Hallies Fall by his side.

While this novella had a more lighthearted feel to it for about three quarters of the story, it does get heavier in the chapters prior to the end of the book. That doesn't mean, though, that it doesn't have a happily-ever-after for Rome and Randi--it does, but they do have to go through a number of trials before they get there. There are a few familiar faces and there is a strong element of family interspersed with the romance and sex that goes on. As always, Joanna Wylde has written a love story that doesn't lack in the kind of intensity that readers have come to expect from her MC romances, and I'm hoping for more from this series. 4.5 stars for Rome's Chance. ♥