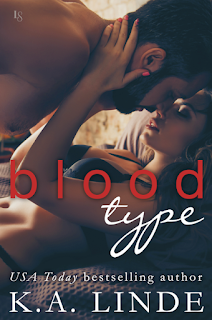 It's been a while since I last read a paranormal romance that had me as fully engaged as Blood Type did. This first novel in the series by the same name has me seeing bestselling author K.A. Linde in a new light given that my exposure to her writing has been solely of the contemporary romance type. Linde creates a world where vampires and humans co-exist, with the former at the top of the food chain and the latter...well, they were the food source. Because so many humans find themselves in dire straits, they turn to Visage, considered the world's largest company and one that specializes in "body employment". Simply put, they provide vampires with humans that become blood escorts, and Reyna Carpenter is desperate enough to sign up for a period of time.

Instead, however, she's offered to become part of a test program wherein she's matched with a vampire. The vampire would be the Sponsor and the human, in turn, would become the Permanent, meaning they would end up living permanently with the vampire who becomes their perfect match. While she may be hesitant at first, the fact that the pay would be double than expected has Reyna agreeing. This would mean being able to help out her older brothers, but she didn't realize it would also mean being in the constant presence of Beckham Anderson, senior vice-president of Visage Incorporated. He's cold, detached, and sees her as nothing more than a very expensive investment. So why is it that Becks chooses not to make her earn her keep by feeding off her?

There's a lot of mystery and intrigue that goes on in this series starter and it's nicely balanced with the romance and sexual tension that thrums between Reyna and Becks. I figured out pretty quickly that this wasn't your run-of-the-mill human and vampire falling in love with one another in spite of the fact that they're two different species. The author did a fantastic job keeping my interest focused on what was going on with the main characters while also piquing my interest regarding certain supporting characters who I wasn't all too sure were all that trustworthy. There's more than meets the eye, especially given that Becks refuses to feed off of Reyna, and with that cliffhanger ending, I'm excited to find out what awaits this unlikely pair. Five stars for Blood Type. ♥