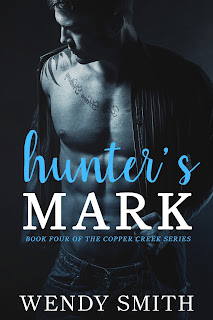 Four books in and Wendy Smith's Copper Creek series has managed to keep me as entertained as ever, plus it pulled a surprise of sorts by giving this fourth and latest release a hint of suspense. Hunter's Mark is Corey Campbell's story, and if you've read the series starter, Coming Home, then you'll know the role Corey played in the second chance love story of his brother Adam and the girl Corey had feelings for, Lily Parker. The announcement of their upcoming wedding forces Corey to realize that it was time for him to truly let go and move forward, but that's easier said than done. Holed up on his property up a mountain has him being both alone and feeling lonely, but then Constance Shaw appears, and Corey's solitary life changes. She's lived on a commune for the longest time, but with everything that's happened recently, Con fears that what once felt like home has become more like a prison. Together, Corey and Con discover that what they've always been looking for has been living next door all along. But will they live happily-ever-after when someone has plans of his own?

Hunter's Mark was a nicely paced love story and it gave the kind of happy ending that I've always felt Corey deserved. Just like the books before it, this can be read as a standalone, but I'm going to make my usual suggestion that you make time to read the other books as well and in order--Coming Home, Doctor's Orders, Baker's Dozen, and then Hunter's Mark--because the series does cover one set of siblings--Adam, Drew, Owen, Corey, and James Campbell--and even though three of the aforementioned brothers have already found love, they do appear again in the other books and at least one brother tends to have his own POV in order to give readers a look-see as to what happens after their HEA. But, at the end of the day, this new novel is mostly about Corey and Constance, and I loved that it did feel the most different in the series. I also liked getting to know Corey much better and seeing that there was a great deal of warmth behind that cool exterior of his. He and Con make it easy for me to declare 4.5-starred Hunter's Mark my favorite in this Wendy Smith-penned series. ♥