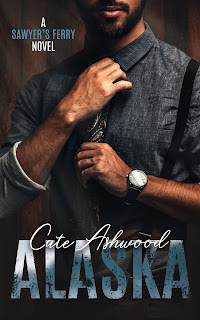 I just needed to figure out what I was going to do about it.


Would it be too early for me to name this series starter as the best medical romance of the year? I've read a number of Cate Ashwood's books over the past several months, including her awesomely co-written standalone with J.H. Knight, When the Devil Wants In, but her opening salvo for her new Sawyer's Ferry series is, hands down, my absolute favorite. From the story and the characters to Ashwood's writing, Alaska is one of those extra special books that tickled my fancy before the book was in my hands and then went on to not only capture my attention but my affection as well. Fine, this first in a series basically took ownership of my heart from the moment Dr. Holden Prescott was ordered by his father to go to Alaska to try and convince Dr. Gage Emerson to return to New York and to the research group he co-founded with the elder Prescott all the way up to a swoon-worthy epilogue.

Holden Prescott knows he has no choice but to do his father's bidding. His way of life, both personally and professionally, are at stake, so off to Sawyer's Ferry he goes. A teeny, tiny town in the middle of Alaska is a far cry from the hustle and bustle of a city in New York, and Holden isn't exactly welcomed by Gage Emerson with open arms. The renowned doctor and researcher refuses to even consider what's being offered to him, and he takes an immediate dislike for the younger surgeon. Failure to get the result demanded of him, Holden is immediately cut off from everything that he knew. One hook-up between Gage and Holden has both men easily addicted to each other and one emergency opens the door for Holden to practice his skills in the remote hospital in Sawyer's Ferry. It's just three months, and then everything will be back to the way it was, but maybe it could take less time for both Holden and Gage to wonder if there's a chance for them to keep everything they way it is, if they just take it...

I love it when a series gets off to the kind of start that Sawyer's Ferry does. Not only did I get one hell of a fantastic story that was undeniably well researched and didn't limit itself to the bare minimum when it came to the medical terminology and procedures mentioned. Thank you, Cate Ashwood, for not underestimating the intelligence of your readers! When an author's story inspires you to actually pick up reference material or Google online in order to gain a better understanding of what's going on or being discussed by certain characters? Total bonus points. I adored the romance between Holden and Gage because it wasn't overly frou-frou and sappy. These two were in a town that was used to harsh conditions from time to time, and the evolution of their relationship was what I would expect given their circumstances. We have ourselves an fantastic story on its own, but we're also introduced to the town itself and the people who are part of it. There are also a couple of supporting characters I'm really curious about, and can't wait to get to know them more. Consider Alaska one of my favorites for this year. Five-plus stars. ♥