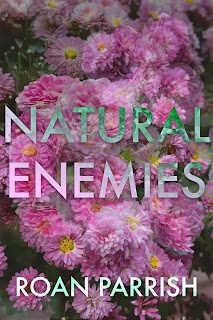 Published as part of the multi-authored Exposed anthology—and one of my favorites that pre-ordered collection—Roan Parrish recently released Natural Enemies as a standalone novella. This M/M romance was more opposites attract than enemies-to-lovers, and while it was a quicker than usual re-read, it proved to be one of the more substantial reads I had this week, which says a lot because I read more than what may be considered the norm. It’s the story of two botanists with very different personalities—Stefan Albemarle who works at Scion Laboratory and Emilio Rios who works at the Brooklyn Botanic Garden. While the two may share a love for plants, their respective foci seemed to be on opposite ends. When Stefan decides to see how someone like Milo could gain the kind of attention and recognition that Stefan has yet to experience, the last thing he expects is for the easygoing and handsome guy to give him the best kiss he’s ever shared. Can love bloom between two people who seem to have nothing more than a love for plants in common?

When I originally read Natural Enemies, it was surrounded by nine other short stories and still it managed to stand out, like an eye-catching, brightly colored flower in the midst of greenery. Re-reading it on its own, Roan Parrish’s novella remains an extraordinary tale of love and respect blossoming out of wariness and doubt. It’s clear that the author did her research, including scientific names of flora yet making it easy enough for non-botanists and non-horticulturists to understand by providing the plants’ and flowers’ common names. In short, this isn’t one of those stories where the characters’ occupations are nothing more than background material. Being botanists—whether it be as a scientist in a laboratory or as a gardener and educator in a garden—is part and parcel of who Stefan and Milo are so skimming over what they do would have been insulting. This may not have as much angst as you’d commonly find in Parrish’s previous work, but it has heart and is creatively original that you’d be silly to miss it. Five stars go to Natural Enemies. ♥