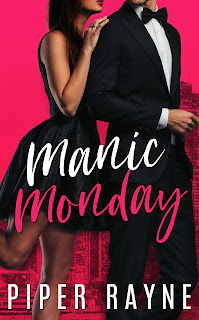 "This thing between us isn't my imagination. There's chemistry and energy bursting between us every time we're together. But I refuse to push myself on you because you I want you to come willing, and I guarantee you will."


Single mother Victoria Clarke was introduced in Chore Play, the third and final novel in the Dirty Truth series, and now the writing duo that make up Piper Rayne have her kicking off their brand-new Charity Case series with Manic Monday. Victoria and her seven-year-old daughter Jade move from Los Angeles to Chicago when Victoria's mother is diagnosed with multiple sclerosis. Her former boss gets her a job with the RISE Foundation, and she's on the path to establishing a stable life for her daughter. She's even expanded her support system to include her new boss, Hannah Crowley, and her co-worker, Chelsea Walsh, both of whom also happen to be divorcees like Victoria. She's not necessarily looking for love, especially not with yet another lawyer who happens to come from money and was her ex's best man at their wedding. Nope, assistant district attorney Reed Warner most certainly isn't the man for her. But from the moment he sees her for the first time in years during a school drop-off on a Monday, Reed is determined to show Victoria how she's the one woman for him.

I am officially declaring Manic Monday my favorite Piper Rayne novel (so far!). This book had the heart and humor that I've come to expect from the authors, but it also felt as if everything came together quite nicely, making for a romantic comedy that was such a joy to read--one that's stayed with me a whole twenty-four hours after. I adored everything about this book! From Victoria being the kickass mom, daughter, and friend to Reed being a man who wanted to prove to Victoria that he had no intention of taking over her world but simply wanting to be a part of it. Then there were the kids, Jade and Henry (you'll have to read the book to find out who Henry is), and the other adults, Victoria's tell-it-like-it-is mother and best friends. Heck, I'll even include her ex-husband Pete Keebler (no relation to the cookie master that is the Keebler elf), who was how I expected him to be...until he surprised me. And in answer to the authors' question: yes, you should absolutely write a book about Pete. If you have never read a Piper Rayne novel, you won't go wrong with Manic Monday. Five-plus stars. ♥