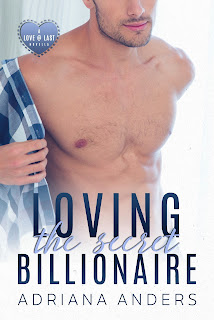 Originally released as part of the Rogue Desire anthology, Loving the Secret Billionaire has now been published on its own and, based on the foreword, expanded and tweaked. This isn’t my first Adriana Anders read, having fallen in love with her Blank Canvas series last year, so I had certain expectations. I knew this was going to be a lighter read compared to those three novels, but I also knew what Anders was capable of, and I also knew what I was hoping this book was not. Maybe the hint of trepidation I experienced was brought about by the book’s title and my lack of enthusiasm for the whole billionaire romance trope. Let me say this: the author proved me wrong, and I’m more than happy to admit that. This was nothing like the what I’ve come to expect from this trope, and to be perfectly honest, pigeon-holing it in with majority of those books that I read and fell into the said trope would have been such a disservice to this great novella.

This Love at Last series starter is a fairly quick read and introduces readers to twenty-eight-year-old preschool teacher Veronica Cruz and twenty-three-year-old financial genius and technology whiz Zach Hubler. They meet when Veronica shows up on his doorstep hoping to convince the resident to vote for her for city council. Zach is nothing like she expected and neither is the crush that she quickly forms for the gorgeous guy. Soon, the two of them become far more intimately involved than either thought possible in such a short amount of time. Zach, however, is keeping quite a few secrets from Veronica, and one in particular that could upset her. When he does something thinking of nothing more than the end goal and how he believes he can help the woman he’s falling for, the fragile foundation their new relationship stands on could easily crumble and bury any chance for the idealist and the billionaire to have a future together.

When a story doesn’t go the way I expect it to, it can either be a good thing…or not. In the case of Loving the Secret Billionaire, it was definitely a good thing. From the story line and main characters involving a candidate for city council and a blind computer genius whose paths cross and summarily become entangled to the quality of writing I’ve come to expect from Adriana Anders, this novella wasn’t just an excellent bit of contemporary romance, but it also got the author’s new Love at Last series off to a fantastic start. This book was sweet and sexy but had this edginess to it that found both surprising and absolutely spot-on. You’d think that a preschool teacher and a reclusive computer mastermind wouldn’t make sense as a couple, but Anders had these two connecting with the kind of chemistry that I can only hope all couples in a romance novel had an inkling of. Loving the Secret Billionaire surprised, satisfied, and set the bar. Five stars. ♥