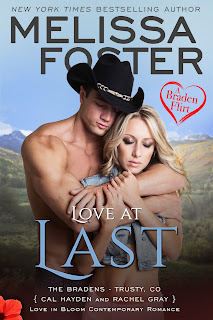 Love at Last is part of the Love in Bloom umbrella series created by bestselling author Melissa Foster, specifically that of The Bradens - Trusty, CO collection. It also happens to be Foster's first Braden Flirt. This is basically a story that has neither of the main characters as a member of the Braden clan. This collection of reads focus on secondary characters that have been featured in full-length novels but have amassed a following of their own with fans and readers or are simply worthy of further exploration by the author via a Braden Flirt.

Because I've never read any of the other books where Cal Hayden and Rachel Gray were part of as supporting characters, I have no idea how much of their back story was mentioned before. I'm also unfamiliar with the handful of other characters that are part of this novella, and I confess that I did feel a wee bit lost because there wasn't just one or two of them interacting with Cal and Rachel. This isn't something new with as far as books in the Love in Bloom umbrella series is concerned, but Foster provides enough to keep it all interesting.

Cal and Rachel have known each other for a while, and they've both had feelings for each other during that time. Cal going from his usually more platonic and gentlemanly self to a more flirty guy has Rachel unsure of what's really happening between the two of them. He's done biding his time. He loves Rachel and he's decides to finally show her just how much she means to him. With friendship as the foundation, can Cal prove to Rachel that they can take their relationship to the next level or has he waited too long to go after the woman he loves?

This was a quick read, but it's also one that's perfect for those short bursts of time that I have in the middle of the day where I want to squeeze in an hour of reading to satisfy the romance reader in me. I liked the chemistry between Cal and Rachel, and while there were quite a few other secondary characters milling about, the spotlight really was on the two of them, allowing me to focus fully on their story and become invested in them. I'm curious to see who the next Braden Flirt will be about, but I hope it'll be as good as Love at Last. Four stars. ♥