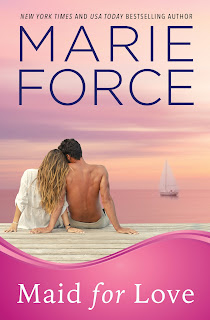 Note: This paperback was provided by the author via InkSlinger PR in exchange for an honest review.

Maid for Love is the first in bestselling author Marie Force's much-loved Gansett Island series, and it was originally released back in 2011. The book is being re-published as a mass market paperback, much to the delight of fans and readers. I'm a huge fan of Force's romantic suspense Fatal series, and I've enjoyed her erotic romance Quantum series, but I'm embarrassed to admit that didn't get around to reading much of anything else until very recently, even though I belatedly realized that I've had the Gansett Island series starter in ebook form sitting in my tablet since 2013. Sad, I know, but I'm a firm believer that it's never too late to read a good book, and that's exactly the case with Maid for Love, a small-town romance set in a Rhode Island town.

The story is about a nearly thirty-year-old single mother and maid at McCarthy's Gansett Inn named Madeline Chester and an almost thirty-five-year-old engineer and business owner named Malcolm McCarthy, Jr. She works at the inn owned by the McCarthys, Gansett Island's most renowned family, and the very same one that Mac has promised to help his parents sell, especially since he and his siblings don't seem all that interested in taking the business over. He escaped the confines of life on the island right after high school and hasn't looked back since, but when he meets and falls for Maddie and her baby Thomas, the trajectory of Mac's life begins to shift. He could see himself settling down with Maddie and her son on Gansett Island but not everyone sees the same.

If this series starter sets the precedence for the rest of the Gansett Island books, then this series has a tamer and sweeter feel to it than the two other Marie Force series that I've read, which isn't really a surprise given that majority of small-town romances that I've perused are more sweet than sexy. Mac and Maddie have an interesting story to tell, given that the latter has been the target of gossip and rumor mongers on the island. She's basically suffered in silence and simply focused on creating a better life for herself and her baby, but Mac isn't the kind of guy to sit idly by while someone's reputation is being disparaged, especially if it happens to be the woman he's falling for. Maid for Love's a very sugary-sweet, small-town romance that's worthy of four stars. ♥