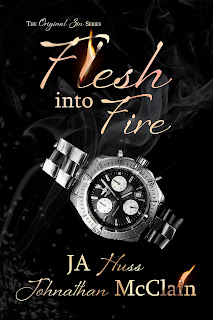 Oh. My. Just when you think the Original Sin series couldn't get any better, the amazing writing duo of JA Huss and Johnathan McClain do exactly that. With everything that happened in the second book and with all the lives that were senselessly lost, Maddie Clayton has had. She not only takes a stand but decides to take matters into her own hands. She doesn't intend to take any prisoners; she wants to make those who have wreaked havoc on her life and on those who matter to her pay and pay dearly. Tyler Morgan is just as angry and just as intent on seeking vengeance, but the one thing he isn't prepared to risk, it's Maddie. He wants nothing more than to make sure that she's protected. He doesn't want her to end up becoming yet another--and more devastating--example of collateral damage. Tyler and Maddie are in for the the fight of their lives; the question is, will both of them survive?

This kind of review is one of the most difficult to put together because I seriously want to gush and say why I'm so totally obsessed with the book in particular and the series in general, but to do so would end up with me most probably spilling a secret or two, which will lead to a spoilery review. So, how do I let people know why this book has quite a few readers gaga over it? Huss and McClain have managed to combine their writing talents together almost seamlessly, and that's one thing that deserves kudos, but the fact that they've created this four-part series that has readers eagerly anticipating each and every single one of the releases? Well, that's a whole 'nother thing altogether. I'm all in when it comes to Tyler and Maddie, and these two may have their struggles, but there's  no denying that they belong together. Flesh into Fire gets five stars; and now the countdown begins for Passing Rising. ♥