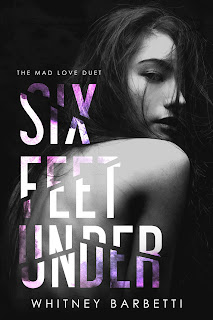 It's Halloween of 2000 when twenty-three-year-old Mira meets thirty-one-year-old Six behind a bar. She's an addict and a cutter and she hears a voices. Her addiction to drugs, her need to cut, and the voices in her head give her exactly what she needs. She knows what to expect when she takes her next hit, slices through her skin, and listens to the whispers. Six, on the other hand, was an unknown entity--one that she wasn't prepared for. He's patient and understanding and is the surprising support system that her mind and heart desperately rely upon. Falling for each other may be madness to many, but denying that love could prove to be maddening.

I've been wanting and needing Six and Mira's story since I met and got snippets of them in Whitney Barbetti's He Found Me series and Ten Below Zero standalone (all of which I read and loved back in 2014). The wait may have been long, but Six Feet Under, the first in the Mad Love duet, has proven to be a very worthwhile one. Two things: First, this is a rather lengthy read, so be prepared to put in a few hours (I finished this in three and a half hours); Second, this ends in a cliffhanger, and if that isn't evil enough (because all cliffhangers are generally evil), the sneak peek of Pieces of Eight may tempt you pull your hair out in frustration due to having to wait a whole two weeks before its release. The first is worth it; the second I have no doubt will be the same.

The author has impressed me each and every time I've picked up a book of hers to read, but I confess that this series starter came with far higher expectations because I'd been waiting for it for more than three and a half years. I'm happy to say that the Six Feet Under met those expectations rather easily, but goodness, how heartrending it was to get through. There's nothing easy nor simply about what Mira has to experience on a regular basis and while Six's love and devotion to her is awe-inspiring, there's no denying how it can take its toll, especially given how resistant Mira can prove to be. While Six remains a mystery in this first book, it does leave me hopeful that we get to know him far better in the second book. These two together may seem like they were doomed from the start, but their story is far from over. Consider Six Feet Under a five-plus-star read. ♥

Purchase Six Feet Under on Amazon.