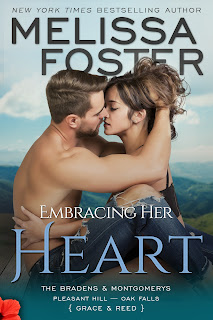 Ah, how I adored this second chance love story from bestselling author Melissa Foster! Embracing Her Heart is the first novel in her all-new Pleasant Hill - Oak Falls series, a collection of stories about the Braden and Montgomery families and falls under the author's Love in Bloom umbrella series. Introduced in the fourth and final book Bad Boys After Dark quartet as the best friend of the newly married Sophie Bad, Grace Montgomery gets her own story told in this new series starter, and she shares it with Reed Cross, her first love and the boy she had a secret relationship with in high school. He also happened to be the boy that broke her heart after their graduation. She went off to New York and he headed to Michigan, their lives no longer entwined. Years later, Grace is back home in Oak Falls, Virginia temporarily. She's surrounded by her family and her roots, and as much as she's made an effort to become more of a city girl, her past is alive and well in Oak Falls, including Reed. While he may have let her go once, Reed doesn't intend to do it again. Will Grace stay or will she still go?

At first glance, the author's Love in Bloom series may seem rather daunting because of how many series fall under it. While each series is interconnected in one form or another and there are characters that crossover and have cameo appearances, a new reader to this new Pleasant Hill - Oak Falls series will be more than able to navigate their way through the love story between Reed and Grace as well as the influx of supporting characters. There's some drama that goes on because, let's face it, second chance love stories have drama to a certain degree. Grace was already a notable supporting character in Brett, and she truly was a worthy main character here. She had a strong personality and I liked seeing her trying to come to terms to the fact that she could find some middle ground between being the woman who found success in the city and the girl whose roots were firmly in the country. Then there was Reed who was such a sweet and amazing guy--someone who loved Grace, his family, and his legacy. Embracing Her Heart was a five-star beginning and I can't wait for more! ♥