Review: As I Am by Melissa Collins 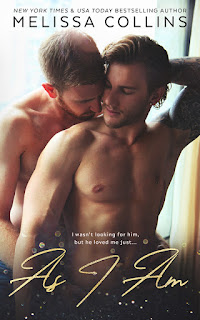 Melissa Collins is one of those authors whose work I've always been curious about. The funny thing is that I actually have the box set of her Love series as well as her Grounded duet set plus her From the Wreckage books and Tangled Vines standalone on my Kindle and Kobo apps. Yes, my book hoarder tendencies are on full display once again, and yes, this is me saying my usual "so many books, so little time" line. The bottom line is that I didn't have the opportunity to read a Melissa Collins-penned novel until the opportunity to review her latest release landed in my inbox. Well, I wasn't going to be foolish enough to miss said opportunity, and i'm glad I signed up because As I Am turned out to be a great introduction to the author's writing and it's got me all antsy to read all those books that I have waiting for me on my tablet and for me to check out the ones that I don't have yet especially since they're M/M, which just happens to be my personal favorite romance sub-genre.

As I Am is an M/M romance about a twenty-three-year-old senior named Chase Hansen who is just a semester away from getting his degree from one of the most prestigious collegiate business programs around when he gets the phone call that changes everything. He goes from older brother to legal guardian of sixteen-year-old Benny as well as going from student to stripper in order to make sure that they have enough to pay their rent and have food on the table. Months into his new life, Chase is feeling desolate and desperate. And then he notices the lone male sitting among all the women in the crowd. The connection between them is palpable, and it leads to a highly memorable hook-up. When they see each other again weeks later, the connection remains, but what would a twenty-eight-year-old doctor like Noah Carpenter want with a guy like Chase? Both men carry baggage, but if they give what they now share a shot, they may find someone who'll love them just as they are.

This was an angsty read, and anyone who's familiar with reviews will remember just how much of an angst addict I am. Chase's back story is as heartrending as it is inspiring given that he set aside his own hopes and dreams to be there for his brother Benny. On the other hand, Noah's relationship woes would make anyone want to take a break from love and commitment. These two had a connection from the get-go, but it was how that connection would be sustained throughout the novel that had me curious. Fortunately, Melissa Collins has put together a love story that highlights how taking a chance on what seems like the improbable could lead to better things. Aside from the romance, I also liked reading about Chase and Benny's relationship as brothers as well as seeing how Noah was with his best friend Wes. Speaking of best friends, I was curious about Chase's, Gavin, since he felt like one of several loose ends of sorts. But overall, I did enjoy reading As I Am. Four stars. ♥